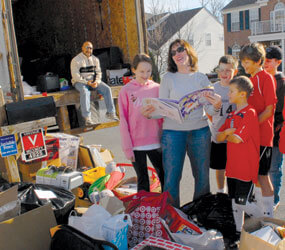 ELLICOTT CITY – As friends and neighbors filled a 53-foot trailer parked outside of her house Dec. 3 with toys, clothes, food and furniture bound for West Virginia, Sarah Ciniero talked about growing up.

You sort of know you are crossing the bridge to maturity, the eighth-grader said, when you’re willing to give up your Barbie dolls for kids you’ve never met. When you want someone else to have a thing you once loved more than you want it for yourself.

“This year I gave away my Webkinz,” laughed Sarah. “That was huge.”

At the kitchen table of the Ciniero family home, Sarah’s mom – Andrea, a catechism teacher at Our Lady of Perpetual Help Parish in Ellicott City and the woman who launched the Christmas drive out of personal tragedy – is overcome by tears.

Not so much for the infant daughter Emily, whose death 15 years ago launched the annual project, as the stark inequities of a seemingly indifferent world.

“My girls don’t even realize it when I purge their closets every year,” said Ciniero, 57, the mother of six and the daughter of a bowling alley manager whose helpers include her husband, Geoff. “For the people who help me, it’s nothing for them to give stuff away. A friend showed up with food, some dishes and a $1,000 check to make out to whoever I wanted.”

Like the toys and food, the money will go to the people of Crum, W.Va., a town of less than 500 on the Kentucky border who are poor even by the standards of the Mountain State.

“We have so much, they have so little” said Ciniero, who, with her 17-year-old daughter, Molly, prepares second-graders for the sacrament of Communion at OLPH.

The two inspirations in “Project Crum” are baby Emily – whose unused nursery furniture was in the first shipment of goodwill – and a 72-year-old truck driver named Bob Ruckman.

A member of the New Prospect Baptist Church in his hometown of Leivasy, W.Va., Ruckman volunteered for the 450-mile haul from Howard County to far southwestern West Virginia in 2009 after a brand-name shipping company stopped participating.

His contribution – everything done gratis, playing Santa when he’s not hauling wood chips to paper mills – is grounded in eyewitness knowledge that “every need does not get met” and the example set in 1986 when he had a heart attack.

“I had no health insurance,” he said. “My church and community chipped in and paid my hospital bill. It wasn’t easy to accept until I realized that they wanted to help.”

In Crum, where the median income is about $15,000 a year, people live in trailers perched on the sides of mountains, homes so battered that some appear abandoned.

At a Masonic Lodge there, Ruckman drops the trailer and helps them unload. All of the contributions – from Sarah and Anna’s Barbie and American Girl dolls to beds and almost-new couches and cases of Libby’s Vienna sausages – are put in a large room supervised by Starting Points Family Resource Center.

Families come from local streets and hillsides and take what they need. Sometimes the children get necessary vaccinations at the same time.

“They open the doors and turn ’em loose!” laughed Ruckman.

And that’s Christmas for many in the West Virginia coal town of Crum, courtesy of the Ciniero family, their many friends and a handful of strangers who live in a different world a mere 400 and some odd miles away.

Not necessarily a better world, just one less lacking.

“Emily dying has helped so many people over the past 15 years,” Ciniero said, of her late daughter. “I’m finally okay with Emily dying.”