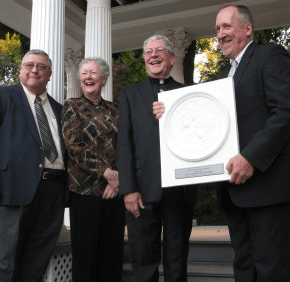 FREDERICK – “I always worry about these awards,” said Thomas Powell, former president of Mount St. Mary’s University and current president of St. John’s Catholic Prep in Buckeystown, as he began an atypical acceptance speech as co-recipient of the 2015 John McElroy Award from the Friends of Catholic Education Inc. (FOCE).

Founded in 1989 and officially recognized by the Archdiocese of Baltimore in 1994, FOCE, an independent nonprofit, has committed since then more than $4.5 million in financial support for Catholic education in Frederick County through scholarships, tuition assistance, capital improvement grants and tuition credits.

At the Oct. 6 dinner and award ceremony at Ceresville Mansion, Powell said he was humbled and pleased by the recognition. However, he added, the reaction to such an honor should be “not accolades” but a question: “What are you going to do?”

As his beef-sated audience wondered, “What is he going to say?” Powell launched into a litany of praise for the man who inspired the award, Jesuit Father John McElroy.

Father McElroy came to the U.S. from Ireland in 1803 in his early 20s, was ordained at 35 and in Frederick established what is now the Visitation Academy, a Catholic school for girls, followed by St. John’s Literary Institution, a forerunner to St. John’s Catholic Prep. In the Mexican American War, he served as the army’s first chaplain, and in 1847 he went to Boston to establish a Jesuit college, all according to a biography provided by FOCE.

After 16 years, thanks in part to Irish immigrants’ property contributions, Boston College received its first charter and, at 81, McElroy started a 10-year tenure as its first president.

“Probably a lot of people told him he was crazy,” Powell commented. “He did it anyway, because he recognized the simple truth that this new nation of ours, America, needed educated citizens.”

“I’m going to try every day to develop myself to be a man like Father McElroy,” Powell resolved.

“There is simply no better priest than Father Larry,” Powell said. “He’s truly Christ’s representative to all of us … You didn’t need the McElroy Award; you got our love, buddy.”

Frederick attorney David Grove, a member of the FOCE board of directors, introduced Father Frazier, who has long served as the archdiocesan representative on the board.

Grove described the priest as a “quiet, gentle man” who was “always an advocate, first and foremost, for the citizens of Frederick County.”

He noted that Father Frazier had been instrumental in establishing the FOCE Mount St. Mary’s Scholarship, one of nearly 20 endowed scholarships. He also mentioned the priest’s “living legacy” of the new church at St. Joseph-on-Carrollton Manor, dedicated May 4, 2014.

Father Frazier thanked FOCE as well as “the pastors of Frederick County and all the priests who have served here for their dedication to Catholic education and for continuing to promote the mission of the church.”

Most stridently, he requested help in getting a vote to the floor this year for the Maryland Education Credit, a bill that would give substantial tax credits to businesses supporting both nonpublic and public education.

“There’s no reason Maryland should not have school choice,” he said, lamenting the fact that for several years running the Maryland Education Credit has been prevented from reaching the floor of the House of Delegates.

“I need your voice,” Sellinger told the audience. “I need your letters to Speaker Busch saying, ‘Let it get to the floor.’”

“If it gets to the floor, it will pass,” Sellinger said.

The chancellor also commented on his continued push to increase enrollment throughout the archdiocese. He has hired enrollment managers for individual schools as “a resource that wakes up in the morning and worries about enrollment.”

He told the educators and donors present that the archdiocese would begin advertising for its Catholic schools on WBAL, social media and on digital billboards.

“We’re going to continue to push this thing and push this thing until people start to acknowledge the fact that Catholic schools are a solid investment for the future,” he said.

Sellinger touched on affordability – his office has seen requests for tuition assistance totaling $35 million for 7,000 families.

A grant program in which the archdiocese adds a dollar to every two dollars raised by a school for tuition assistance, is one way those in need are being helped, he said.

He encouraged Frederick County schools to grow endowments from which they can offer tuition assistance, “but the other effect this has is we can hopefully keep tuition flat.”

Sellinger also mentioned plans to renovate schools, which are on average 65 years old, and even build some new schools.

Furthermore, Sellinger said, his department has enlisted Fielding Nair International to determine what needs to be done in each archdiocese school to make it a “21st century school,” and to “increase the overall educational efficacy of that building.”

Over sausage and eggs, educators and students tout benefits of PIE