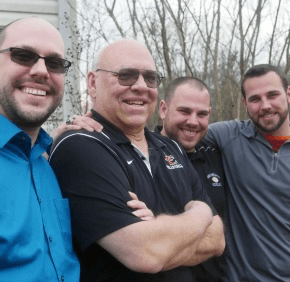 By Melody Simmons
Special to the Review
Growing up in Baltimore with the last name of D’Adamo meant one thing for certain: you could communicate.
The patriarch, Joseph Sr., 86, led the composing room of The Evening Sun, pasting up the now-closed daily newspaper the old-fashioned way, with an exact-o knife and pica ruler.
His son Joe Jr., 62, and his three sons – Phil, 31, John, 34, and Ed, 28; chose a slightly different path. All hold various teaching and mentoring positions in Baltimore’s Catholic schools or in the private sector.
Their abilities to reach out and connect with others is a sweet spot for this family, based in Essex where the two-story home of Joe Jr. is a gathering place for the extended family
“Education, in general, provides the best opportunity that we can for children,” said Joe Jr., who has taught physical education for 34 years at St. Clement Mary Hofbauer School in Rosedale, where he also teaches seventh-grade science and leads a sixth-grade homeroom.
“All children learn at different paces and different ways. We have a great opportunity to affect young people and how they turn out.”
He went to the former parish school at the Shrine of the Little Flower and then Archbishop Curley High School, both in East Baltimore. Those years, he said, helped him form a love of Catholic education and its structure and focus on values and faith.
“I’ve always thought that was one of the key things: to stress values over the rote education that you learn,” he said.
Over the years, he said he has seen more changes in parents and their way of life than his students.
“We have seen changes in society over the past 40 years,” he said. “Kids are different in what they know, what they are exposed to and what they see in the media.”
Joe Jr. said he and his sons did not hatch a plan for all to build careers in education.
“I never discouraged them, but I felt I never gave any kind of push toward the teaching profession,” he said. “To be honest, what parent wants their kid to go into a profession where they never make much money? But that’s the way things turned out.”
All of his sons graduated from Curley, where the family still has strong connections.
Phil, a physical education teacher at St. Joseph School in Fullerton, is an assistant football coach at Curley, where he graduated in 2001.
Out of college, he worked as personal trainer for seven years, then followed his father’s path. He almost didn’t want to teach, he said, because it was what his father and brother were doing already.
“I wanted to be myself, be my own person and take my own path,” he said. “But after a while, and several years of coaching, I decided it was what I was supposed to do.”
The rewards, he said, are great. They center on “being able to see the changes in kids, seeing kids grow up.”
Many in college and then the workforce have returned to say, “Thank You.”
“It’s so rewarding to see that you had an impact on that person,” Phil said. “I don’t see myself wanting to do anything else, really. It’s too much fun, it’s rewarding to teach.”
John, the principal of St. Ursula School in Parkville through June 30, when he will take another administrative assignment in the archdiocese, taught English at Curley for 10 years and was assistant principal of Immaculate Heart of Mary School in Baynesville for two years.
“It’s a way of life for us,” said John, of the education-based shop talk the D’Adamo men break into when they visit.
“My father has been a role model for me over the years as I go forward as an educator,” John said. “It’s something that I felt called to do.
“Anything that you are going to find true happiness to do is by heading a vocational call. I think that’s something that we all have experienced and are products of Catholic education and we all ended up exactly where we are supposed to be as a result.”
Ed is the family’s only non-educator, but mentors others in his home-building job.
“I got the same work ethic, drive and motivation that my father had and both my brothers at this point to follow their goal and really have a path set for what they want to do in life,” he said.
Also see:
Winter takes toll on school calendar, collection basket
An open door and a Catholic renaissance; Mount St. Mary’s says goodbye to Dr. Thomas Powell
Beyond the Bell: Curley jazz ensemble is more than just music
PrevNext