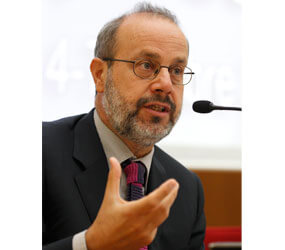 VATICAN CITY – The editor of the Vatican newspaper said he was cured of a childhood disease through the intercession of St. Pope Pius X.

“I have an authentic veneration for him because, according to family tradition, I was miraculously cured because of him,” said Giovanni Maria Vian, editor of L’Osservatore Romano.

In 1954, when Vian had just turned 2 years old, he was struck by “an almost deadly form of diphtheria,” he said in an interview with Il Consulente Re, an online Italian Catholic magazine.

Vian said that on the eve of Pope Pius’ canonization in May 1954, a Spanish priest who was a friend of Vian’s father said the family should pray for the intercession of the late pope. Family members already felt a close tie to the Treviso-born pope because they were from the same part of northern Italy, Vian said.

After the priest celebrated Mass “on the pope’s tomb” in St. Peter’s Basilica, “I was cured,” Vian said.