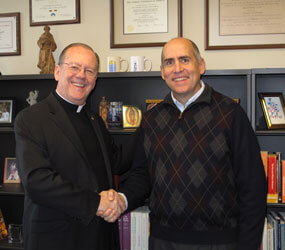 Michael Downes has come back home to the Monsignor O’Dwyer Retreat House.

Downes, who worked with youths at St. Mary’s of Annapolis and St. Jane Frances de Chantal of Pasadena during the 1990s, has been named administrator of the youth retreat center in Sparks, which hosts Archdiocese of Baltimore programs, events and school retreats.

Downes was previously involved in the archdiocese’s High School Leadership Institute (High Li) at the O’Dwyer Retreat House. He also contributed to Micah 6:8, a social justice program for archdiocesan youths.

“I’m so happy to be back,” said Downes, 49. “It’s just a great thing. It’s so exciting. The house has such great energy. The young people enjoy being there. It’s neat to see the experiences that they have there and how they get in touch with the faith while they are there.”

After working with archdiocesan youths during the 1990s, Downes moved on to work with the National Federation of Catholic Youth Ministry, the YMCA of Central Maryland and in the construction business in Delaware.

After earning his master’s degree in education in the early 2000s, Downes taught for a year and then stayed home with his growing family. Downes and his wife, Stephanie, have two sons, Jason, 10, and John, 8.

Through it all, Downes said he felt the call to work with young people again and help them grow in their faith. He said that youth ministers serve a vital role as mentors in faith and life.

At the retreat house, Downes will serve as staff supervisor and be involved in fundraising and development. The O’Dwyer Retreat House has several popular fundraisers, including a golf tournament, bull roast, raffle and silent auction.

The retreat house is an outreach of the archdiocese’s Department of Evangelization. Father John E. Hurley, executive director of the department, is the retreat house’s director.

“I will sort of be a liaison and connection between the house and downtown,” Downes said. “I really want to create some synergy and make sure we’re doing everything we can to support the mission of the department.”

Downes said the retreat house has a promising future, and wants to extend a welcome to young Baltimore City parishioners as well.

“It’s got a great reputation,” he said. “I want to make sure the house has a very strong sense of hospitality.