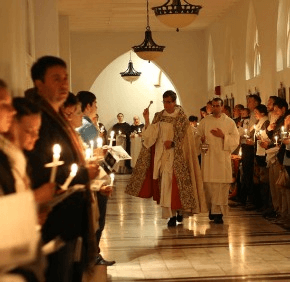 WASHINGTON – The tension and frustration that the country feels over an election season filled with insults and rancor, feels a bit more amped up in Washington, the city where the winner of the presidential race will reside.
With days to go before Election Day, the feast of All Saints seemed like a good occasion for the Dominican House of Studies in Washington, about three miles from the U.S. Capitol, to provide some respite for the weary.
While some attended Halloween festivities Oct. 31, the Dominicans filled their chapel in the evening with candles, prayer and people, as hundreds gathered for an event focused on the saints on the vigil of their Nov. 1 feast. They listened to the words of St. Catherine of Siena, St. John Paul II and St. John Chrysostom as well as Pope Francis’ remarks on one of the newest saints of the church: St. Teresa of Kolkata.
Recognizing the tension in the country, Dominican Brother Isaac Morales said he hoped the evening would provide “a sense of hope” and connection with the saints during a tough period. After all, he said, the saints, too, faced seasons of trouble. He recalled St. John Paul’s trials and tribulations as well as Mother Teresa’s.
He said it was edifying to see the chapel packed with those seeking prayer and serenity.
“I came seeking spirituality,” said Yorgos Schwartzmann, who attended the event for the first time and said the meditation helped him find a better understanding of others.
Rachelle Nigro told Catholic News Service she attended because of the peace the event brings, particularly in the serenity of the chapel, where the Dominican brothers offered their prayer in song while celebrating the saints.
Rachael Osborne, of Washington, held a candle in one of the hallways and concentrated on the Litany of the Saints as one of the brothers blessed the hundreds who lined the cloister walk.
“I’m grateful to celebrate this,” said Osborne, who said the event helped her feel close and connected to the saints.
During the vigil, Dominican Brother Irenaeus Dunlevy said the saints help people find mercy and goodness, they help people see the face of Jesus in others, and that this can help people grow in mercy. To participate in God’s mercy is to act, he said, adding that God’s mercy is not a thing but an action: giving life, redeeming, strengthening, empowering and elevating others.
“The saints exemplified this acting of mercy,” he said.
The saints also reflect God’s light into the world, he said.
“We need that light today,” he said. “Because without it, we’re capable of committing the darkest acts in the name of mercy.”
He reminded those present that the District of Columbia’s city council was voting, on the feast of All Saints, on a bill that “suggests it is merciful to kill those who are near death. Without the light of wisdom, we might kill in the name of mercy,” he said.
He asked those present to call out to the saints, “our friends,” to be transformed in the image of mercy, reflecting God’s love “toward all those we meet.”

New exhibition at Walters Art Museum is feast for the senses