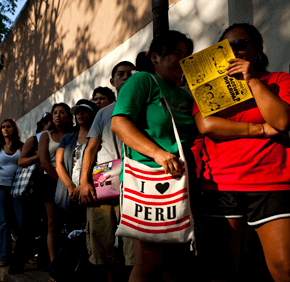 More than 100 youths lined the exterior wall of Casa de Maryland in West Baltimore Aug. 16 hoping to apply for a new federal program that provides a temporary visa to talented undocumented immigrant youths.

Eligible youths for the Deferred Action for Childhood Arrivals program, which launched Aug. 15, must meet age and education requirements and not “pose a national security or public safety risk,” according to the U.S. Department of Homeland Security, which announced the program June 15.

The program is designed to help undocumented immigrants who came to the United States as children. Applicants must have arrived in the country before age 16. The temporary visa offers a two-year reprieve from deportation risk and the opportunity to apply for work authorization, and in most states, a drivers’ license.

Casa de Maryland, a Latino community assistance and advocacy program, organized events where youths seeking the temporary visa could meet with lawyers to review their case individually and ensure it is properly submitted to U.S. Citizenship and Immigration Services.

First in line for Baltimore’s first event were brothers Joel and David Ventura, both holding binders filled with papers documenting their program eligibility. They came to the United States from El Salvador at ages 14 and 13, respectively, and live in Silver Spring.

Joel, now 22, recently graduated from Montgomery College with an associates degree in architectural technology. David, 21, has worked in management. He is searching for a new job, which he hopes a temporary visa will help him find. The two hope to open a restaurant together one day.

Both faced challenges when enrolling for classes or finding work because of their undocumented status, but they also met people who wanted to help them, they said.

To become citizens would be a “dream come true,” Joel Ventura said.

The temporary visa is not a path to permanent residence or citizenship, but the Venturas still found the federal action promising.

So did Zuly Portillo, 23, a Catholic who lives in Baltimore. She was born in El Salvador and came to the United States at age 9.

“I am so excited and happy,” she said.

The Deferred Action program begins as Marylanders prepare to vote on a referendum on Maryland’s DREAM Act, which allows undocumented immigrants who meet specific criteria to attend a Maryland state college or university at in-state tuition rates. The state’s Catholic bishops support the DREAM Act.

None of the youths interviewed by the Catholic Review were concerned about submitting documentation with their names, addresses or other identifying information to U.S. immigration agencies, although temporary visas are not guaranteed.

Guatemala-born Sindy Herrarte, 18, who stood in line with her 16-year-old brother Eswin, said deportation has worried her in the past, and she expects the temporary visa to waive her anxiety for awhile. She looks forward to working legally after she graduates from the Chesapeake Center for Youth Development, a Baltimore charter school, she said.

Casa de Maryland’s Aug. 15 event in Langley Park, Md., for Deferred Action applicants drew more than 1,200 people, said Susana Flores, a spokesperson for the organization. Jonathan Perez, 16, arrived at the Baltimore office of Casa de Maryland at 7 a.m. after watching television news reports of long lines at other sites the day before.

A student at Baltimore City College, Perez never worried about his own deportation to Honduras, where he was born, but he was concerned for his parents, who brought him to the country in 2003, he said. His two younger brothers were born in the United States.

Casa de Maryland will hold several application events each week for the foreseeable future, said Elizabeth Alex, Casa de Maryland’s lead organizer for central Maryland. She expected many of those who were in line needed to collect more documentation before they were ready to apply.

“This is a tremendous victory for immigrant youth in Maryland and throughout the country,” she said. “People are seeing this as a first step towards what will hopefully be a much further reaching reform in Congress.”

She added: “It’s a sign things are moving in the right direction.”