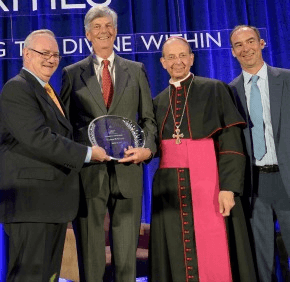 By Paul McMullen
pmcmullen@CatholicReview.org
Twitter: @ReviewMcMullen One day after he declined to take a well-deserved bow in recognition of his service to his country, James W. Taneyhill reluctantly accepted the thanks of Catholic Charities.
Taneyhill received a Distinguished Service Award March 30 at Morgan State University, the site of “An Evening With Catholic Charities.” A semi-retired dentist, Taneyhill established a pro bono clinic four years ago at Our Daily Bread for the men in its Christopher Place Employment Academy.

He offered a short, sweet acceptance speech, thanking, among others, leaders of Our Daily Bread and his fellow parishioners from St. John the Evangelist in Hydes.

Taneyhill, 68, was also worthy of acclaim March 29, Vietnam Veterans Day. In between his days at what are now Loyola Blakefield and Loyola University Maryland, and then dental school, he enlisted in the U.S. Army and was a pilot with the 48th Assault Helicopter Company, attached to Da Nang.

“I tend not to take time for that,” Taneyhill said, of his service in Vietnam. “That was a long time ago.”

Besides, he appears too busy to talk about the past.

Before donating his services to Catholic Charities, Taneyhill was – and remains – a valued member of the Baltimore Haiti Project, bringing pro bono dental work not just to La Chapelle, St. John the Evangelist’s sister parish in the Diocese of Gonaives, but to the institutions begun by the project.

He has made “20 or 21” such missions of mercy to Haiti, a purpose of spirit Taneyhill traces to the Jesuits who taught him in high school and college.

“It was pointed out to us,” Taneyhill said, “that we were lucky and we needed to return the favor. ‘Men for Others’ (the Loyola Blakefield motto), I kind of took that seriously.”

“This is not a tough thing to do,” he elaborated. “I get to rub shoulders with incredible people. Whether it’s with my parish, a dental group I travel with to Haiti, or at Our Daily Bread, the workers, volunteers and clients are fun people to be around, happy and smiling.”

James W. Taneyhill, a parishioner of St. John the Evangelist in Hydes, has volunteered thousands of hours of dentistry work, including to the men of the Christopher Place Employment Academy at Our Daily Bread, programs of Catholic Charities of Baltimore. (Kevin J. Parks/CR Staff)

He has made that easier for many of the men at Christopher Place, formerly homeless and unemployed, enhancing their job preparedness with what, for some, might be their first time in a dentist’s chair in decades.

“A lot are missing teeth,” Taneyhill said. “I’m just trying to make them look a little better before a job interview.”

At the Catholic Charities dinner, Taneyhill said he was “beyond humbled,” especially to share the stage with Jesuit Father William J. Watters, the inaugural recipient of the Monsignor Arthur F. Valenzano Joyful Servant Award. The recognition is named in honor of the revered Archdiocese of Baltimore priest and rector of the Basilica of the National Shrine of the Assumption of the Blessed Virgin Mary in Baltimore who died in September 2015.

Christians and Jews feed Baltimore’s homeless, have lively discussion of ‘The Giving Tree’

Father William Watters: ‘Rather than curse the darkness, light a candle’