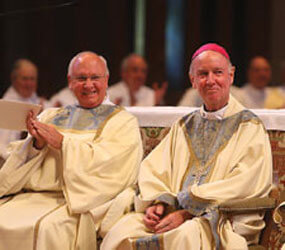 Service and reaching out to others seem to come naturally to Deacon Charles H. Hiebler Jr.

A deacon of 27 years who enjoyed a 20-year career with the Boy Scouts of America’s Baltimore Area Council, Deacon Hiebler finds joy in working with people. This service has not gone unnoticed, and on Jan. 26 Deacon Hiebler will be honored by the Boy Scouts of America with its Silver Beaver Award, which is reserved for adult leaders who have had a significant impact on youngsters.

“I was surprised, humbled and happy,” said Deacon Hiebler, upon learning he was to receive the award. “But I think the award is really in recognition of the people who have allowed me to do what I have done.”

There was a time when Deacon Hiebler was in the seminary, but he decided not to become a priest.

“I was in the seminary before, during and after the Second Vatican Council,” he said, “but I decided that my call to service to people should take a different path.”

Deacon Hiebler has years of experience with the Boy Scouts, having been a Scout as a child. He has also served as director of religious education for both Immaculate Heart of Mary in Baynesville, where he is currently a parishioner, and Our Lady of Grace Parish in Parkton. Since 2002, Deacon Hiebler has served the Archdiocese of Baltimore as assistant to the bishop for six Western Maryland counties in the Seton Vicariate, doing pretty much whatever is needed.

“I train pastoral counselors, and develop workshops to improve teamwork and communication,” Deacon Hiebler said. “We managed to merge five parishes in Cumberland into one. It was a huge project, but we completed it in one year.”

Although he is no longer on the payroll of the Boy Scouts, Deacon Hiebler nonetheless has remained active as an adult volunteer.

“I’ve known Charlie since 1961, and he is a great model for the scouts,” said Monsignor Tom Phillips, pastor of St. Gabriel in Woodlawn and the chaplain for Scouts in the Archdiocese of Baltimore. “He really goes the extra mile when working with the Scouting program, and he has a style with people that gives them a sense of their importance.”

It is not just Deacon Hiebler who has had an influence on young men and women through Scouting: the organization has had a huge impact on him, as well as his daughter and two sons, all of whom were Scouts.

“I realize how much I have benefitted in terms of personal growth, character and leadership development,” he said. “And I wanted to see that tradition continue for others.”

With his more than five decades involvement with the Boy Scouts, Deacon Hiebler has seen changes. It is no longer an organization that focuses exclusively on camping and hiking.

“Scouting has adapted with the times,” he noted. “We have expanded our outreach, especially in inner city areas and with underprivileged children.”

And in the Baltimore Area Council (Baltimore City and the five surrounding counties), there are more than 36,000 scouts – both girls and boys can be members of the Boy Scouts – and another 15,000 adult volunteers.

A few of Scouting’s more recent efforts include a Learning for Life Program – an outreach to youth in Baltimore City that introduces them to scouting. There is a Career Exploration program, which arranges for children to interact with adults, such as Baltimore City police officers, and those working in various positions in health care and technology. In addition, the council offers a STEM (Science, Technology, Engineering and Math) program to address the shortages in these areas.

Deacon Hiebler points out that he is chair of the local Boy Scouts Interfaith Committee and is the chair of the Hopkins District, which encompasses the eastern half of Baltimore City.

“I used to be chair of the Catholic Committee on Scouting” he said. “The Interfaith Committee explores the idea of fostering Scouts’ understanding of the various religious of the world and to provide ways for them to reach out to the youth of different religions.”

Yet, as rewarding as his work with the Scouts is, there are challenges – the biggest being able to recruit enough adult volunteers to make it possible to reach out to more children. But, said Hiebler, if you can’t build a fire or follow a compass, don’t despair.

“We need men and women to have an interest in working with youth, who are of good character and can pass the background check and the Catholic Church’s STAND program,” he said. “You don’t necessarily have to know much about scouting – we can teach that. What we need are really good adult role models.”