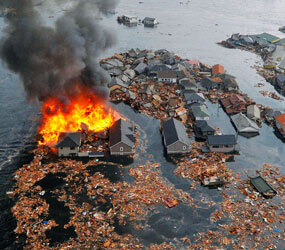 TOKYO – Damage from a magnitude 8.9 earthquake and ensuing tsunamis were preventing church officials in Japan from assessing needs as tsunami warnings were issued for 50 other countries.

Yasufumi Matsukuma, a staffer at the Japanese bishops’ conference, told the Asian church news agency UCA News that most staffers would remain in the offices overnight because of suspended rail service and continuous aftershocks.

“In Tokyo, telephone lines are so busy that I cannot contact diocesan chancellor offices in Japan. Aftershocks have followed. The tsunamis are terrible and we cannot get any information concerning the church yet,” he said.

Disruption of telecommunications has made it impossible for the conference’s general secretariat to contact Sendai, near the quake’s epicenter, and neighboring dioceses, he added.

Television and web video showed cars, ships and even buildings being swept away by a wall of water hitting Sendai, and CNN reported police discovered at least 200-300 bodies in the city.

Daisuke Narui, executive director of Caritas Japan, said in a statement: “We are still collecting information at this point, but currently we are not able to communicate on the phone. Cell phones are also out of service.”

A spokeswoman for Catholic Relief Services said the agency was on high alert in many countries in Asia, including the Philippines and Caritas Oceania, which is active in many islands in the Pacific.

This earthquake is the strongest since a magnitude 9.1 quake struck off Indonesia in December 2004. The quake and the tsunamis that followed left about 220,000 people dead or missing in more than a dozen countries around the Indian Ocean.

“We know from 2004 the devastating impact that these tsunamis can have,” said Sean Callahan, CRS executive vice president for overseas operations. “As with all such disasters, CRS will help people recover from the emergency and stand with them as they recover.”