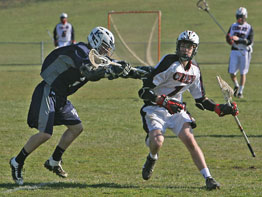 The Archbishop Curley High School, Baltimore, Friars enter the 2008 lacrosse season coming off a 2007 MIAA B Conference championship and an 18-1 overall record – the school’s best.

Head Coach Josiah LaTona, in his ninth season, said that the Friars graduated 12 off of last year’s championship team, but with another strong senior class in place, they hope to be an elite team in the B Conference again.

On March 20, Curley opened its season at home against Key School, Annapolis. The Friars obliterated the Obezags 14-4 under gray skies, blustery winds and early spring-like conditions.

The Friars are poised for another run at the MIAA B Conference championship in May under the leadership of Coach LaTona and his assistants, Chris Ogle, Joe D’Adamo and Frank Romeo.