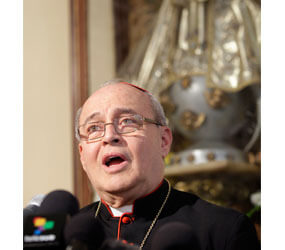 HAVANA – Days after two Cuban Catholic archbishops came away from a four-hour meeting with President Raul Castro voicing optimism that conditions would improve for jailed political dissidents, one Cuban human rights activist said he was told the changes would begin May 24.

Havana Cardinal Jaime Ortega Alamino and Archbishop Dionisio Garcia Ibanez of Santiago, president of the Cuban bishops’ conference, told reporters May 20 that they believed “small steps” would soon begin in the process of improving the conditions for political prisoners. They said their May 19 session with Castro was “a magnificent start,” but “we are not talking about any commitments,” and that talks would continue between the church and the government.

On May 24, the Miami Herald daily newspaper reported that Guillermo Farinas, an independent journalist hospitalized in Santa Clara because of a lengthy hunger strike, said he was told the Cuban government would begin moving sick political prisoners to hospitals and allow other dissidents to be detained closer to their homes. Farinas said Havana Auxiliary Bishop Juan de Dios Hernandez Ruiz told him May 22 the changes would begin the following Monday and that eventually some of the jailed political activists could be freed, the Herald reported.

Farinas told The Associated Press that he would end his hunger strike if the government provides the church with a schedule for the release of the dozen political prisoners who are the most ill.

In the bishops’ press conference, Cardinal Ortega also noted that Archbishop Dominique Mamberti, Vatican secretary for relations with states, would visit Havana June 15 to participate in a commemoration of 75 years of diplomatic relations between Cuba and the Vatican. He was invited by the Catholic Church and the Cuban government.

Within weeks of Pope John Paul II’s 1998 visit to Cuba, the government freed about 300 prisoners. When the Vatican secretary of state, Cardinal Tarcisio Bertone, visited Cuba in 2008, seven prisoners, including four dissidents jailed since 2003, were freed shortly before he arrived.

This spring the government was in a public showdown with the Ladies in White, a group of female relatives of political prisoners. The women attend Mass each Sunday dressed in white, then walk down a major Havana street in a silent protest.

In April the women were stopped from their march for three weeks by counterprotesters who shouted pro-government slogans and blocked the women’s path. After Cardinal Ortega mediated between the government and the Ladies in White and the women gave assurances they would not expand their activities, the government allowed the quiet protests to continue.