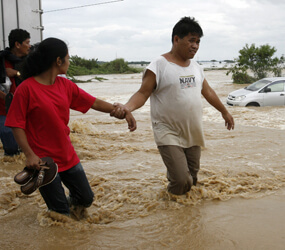 WASHINGTON – A new wave of flooding, brought on by the second tropical storm to hit the Philippines within 10 days, has left thousands of people homeless and at least 18 villages underwater, Catholic Relief Services officials reported.

Flooding in the provinces of Pangasinan and Benguet, about 120 miles from the capital Manila, began Oct. 8 after one dam collapsed and officials released water to save another dam from being breached as Parma, downgraded to a tropical depression, continued its onslaught of the island nation.

Pat Johns, director of emergency operations for CRS in the Philippines, told Catholic News Service by phone Oct. 9 that the region underwater was already saturated after Typhoon Ketsana swept through the country Sept. 26, dumping more than a month’s worth of rain in 12 hours.

Johns was planning to visit the region Oct. 10 with representatives of Caritas in the Philippines to assess the extent of the flooding and determine exactly how many people were forced to flee when waters rose rapidly after the dam along the Agno River failed. CRS, the U.S. bishops’ international relief and development agency, is part of the Caritas Internationalis charitable network.

Philippine authorities said 60 percent of Pangasinan was flooded, and more than 1 million people were forced to flee to higher ground. In addition to the displaced people, government emergency management officials reported hundreds of people died in landslides caused by downpours from Parma as the storm lingered off the northeastern coast.

“We’ve talked to our diocesan counterparts and it sounds like it’s pretty devastating,” Johns said. “You’ve got people who are up on their rooftops because of the flooding that has occurred. They’re just waiting for people to reach them.

“This is a new area (for flooding),” he added. “This area was not an area we were too worried about until that last 24 hours.”

Debbie DeVoe, regional information officer for CRS in Manila, told CNS flooding reached the second story of buildings in the Urdaneta Diocese. In the nearby Alaminos Diocese, she was aware of at least 100 families who were forced to leave the coastal area.

In the Lingayen-Dagupan Archdiocese, DeVoe reported, at least 18 towns had water that reached the rooftops of homes.

“At least 20 houses, riverside houses, were washed away by water (released) from the San Roque Dam,” she said.

Since Ketsana hit the country Sept. 26, CRS and Caritas in the Philippines have distributed 5,000 kits of nonfood items, including pots, pans, blankets, mosquito nets, buckets and water jugs. Overall, CRS has aided more than 30,000 people around Manila, she said.

“I think we’re already inundated by need,” she said.