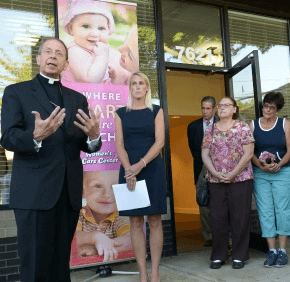 OVERLEA – “Things happen for a reason,” some religious people tend to say.
Every once in a while, those reasons are evident to mortal intellect.
As she walked across Belair Road from Whole Woman’s Health of Baltimore, an abortion facility, to the Women’s Care Center, a pro-life pregnancy center affiliated with the Archdiocese of Baltimore, 18-year-old Tayonna Ashby felt fear, nerves and something else.
“I was praying and thanking God the whole time,” said the young mother-to-be. “I didn’t want to get an abortion.”
She had been dropped off at the abortion facility by a family member who felt that such a measure was necessary for the young woman to secure a future. Per differing accounts, staff at Whole Woman’s Health either determined that she was too far along in her pregnancy or simply too visibly distraught to go through with an abortion.
Either way, an unprecedented event happened: A staff member of the abortion facility phoned the Women’s Care Center and alerted them to be on the lookout for the young woman.
Such direct communications are rare to singular, but sonographer Amy Erardi noted that the care center does encounter a fair number of women who were looking for the other destination.
“We take it as an opportunity to love on them and show them the truth,” Erardi said. “We reiterate what we are and what we do. … You don’t ever want to be forceful (or) misleading; and you don’t ever want to lie.”
Some sit down and stay; some don’t, said Erardi, a parishioner of Ss. Philip and James in Baltimore, a Dominican-staffed parish associated with Johns Hopkins University. Some, she added, will go to the intended destination and abort their child, but will later seek out Women’s Care Center upon a subsequent pregnancy.
Licensed therapist Leigh Anne Tabernero, who accompanies women through the intake process, said each has a unique story, which they will open up and tell, sometimes running well over the 45 minutes allotted for intake and a free pregnancy test.
“Overwhelmingly, that’s what they need – someone to hear their story,” said Tabernero, 28, a parishioner of St. Stephen Parish in Bradshaw.

Before joining the Women’s Care Center, she had worked with women with a history of being abused, finding many also had a history of abortion. While she saw another trauma to be addressed, higher-ups “didn’t like to approach that as a clinical issue,” she said.
In her current role, Tabernero, who sees about 50 new women every month, is often the first to tell a woman definitively that she is pregnant. She noted that women sometimes come because the test and other services are free at the donations-funded care center.
“Every client is different,” she said. “I always say my first job is just to slow people down, to get them to think about things one step at a time.”
When a woman does decide to keep her baby, sometimes after multiple uses of the ultrasound machine, the decision may show before she speaks.
“I’ll see in her face that she has just changed,” Tabernero said. “She has so much peace due to her choice.”
Erardi, 39, said the Women’s Care Center “is just a small part of it,” with mothers and Providence doing the heavy lifting. Save for the logistics, such work was largely complete in Ashby, the 18-year-old, by the time she met the faces at 7625 Belair Rd., which she described as “all smiles.”
“They welcomed me,” she remembered. “They were filled with joy to have me, actually.”
Seeing her baby move on the sonogram, she knew she had made the right decision: “I forgot everything that happened that morning. It was like it didn’t happen.”
Today, instead of fearing for her future, she is looking forward to sharing it with the baby girl due Feb. 24.
“The word ‘mom’ makes me feel strong and independent,” said Ashby, who has shed influences she identified as harmful as she prepares to become a primary one herself.
Working at a Washington, D.C., restaurant, she plans to attend cosmetology school after her child is born and eventually become an obstetrician. She worships at Refreshing Spring, of the Church of God in Christ,  in Riverdale.
Ashby’s relationship with the care center staff has blossomed; she regularly texts them updates on her pregnancy.
After a mother has her baby, the Women’s Care Center will continue to work with her as a “goals client,” sometimes until her baby turns 5, if necessary. Clients who complete steps toward their goals – reading helpful literature, for example – earn coupons that may be exchanged for infant and toddler items at the center’s “crib club.”
As one who has been there, Ashby has her own advice concerning “the edge”: “Go with your heart, even though you’re going to have people tell you, ‘Oh, it’s not the right decision; a child is going to slow you down.’ It will be hard, but that’s what life is – it’s a learning process.”

U.S. abortion rate at its lowest since 1973 Supreme Court ruling