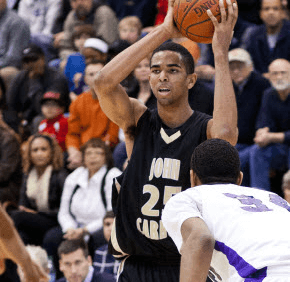 Jarred Jones’ domination on the basketball court did not occur overnight.

According to the John Carroll senior, his adoration for the sport had been in him well before he ever stepped foot on a court for the Patriots. Coupled with his natural competitive instinct, that makes him a force to be reckoned with.

“Ever since I was a little kid I’ve loved the sport,” Jones said. “It’s just something in me that likes basketball so much. I like competing in it, because there’s always somebody who’s better than you and you want to prove that you’re better than them.

“I like winning – I take losing to heart and it makes me want to play better and win even more.”

Jones led John Carroll to the Maryland Interscholastic Athletic Association A Conference tournament title, and into the final of the Baltimore Catholic League tournament, where it lost to Mount St. Joseph. Both teams will join host Bishop Walsh of Cumberland at the prestigious Alhambra Catholic Invitational March 15-17 at Frostburg State University.

Jones has earned a number of honors, including first-team all-BCL.

A forward, Jones said he tries to slow the game down in his head in order to exploit mismatches, whether it involves him or one of his teammates. He takes pride in this, and said it’s an example of how he’s grown as a leader on the court.

“I’ve been a captain since I was a sophomore, so I’ve always been in a leadership role,” Jones said. “I’m normally the one who makes sure everyone is in the right position. They know when to give me the ball and if they’re having a good day or a potential mismatch, I feed them the ball.”

John Carroll coach Tony Martin has watched Jones grow into the leader that he is now. Calling him a fearless and high-energy player, Martin said Jones sees and anticipates things on the court better than most players.

“He’s a versatile player who is an outstanding young man to coach,” Martin said. “He has a high basketball IQ. He’s unselfish and that makes him a great teammate.”

Off the court, Jones has a 2.9 GPA with a course load that includes Understanding the Chesapeake, Algebra III/Trigonometry, Economics and Anthropology.

In his spare time, he has volunteered at senior citizen retirement homes in the Catonsville area.

Jones has verbally committed to play for Loyola University of Maryland.

“He’s a ‘glue’ guy,” Martin said, “he does a lot of different things that can make up for deficiencies in other players, so we’ll have to replace him by committee when he graduates.”