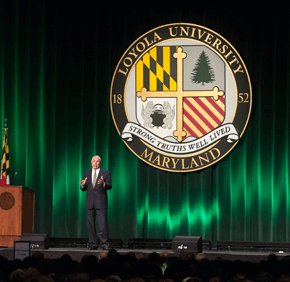 By Jessica Marsala
jmarsala@CatholicReview.org
At the second annual Hanway Lecture in Global Studies at Loyola University Maryland Oct. 22, former Secretary of State Colin L. Powell suggested that, despite his prestige, he is now just an ordinary person.
“I’m just (another) guy on the street now,” Powell said, after noting tongue in cheek that he no longer has his own airplane, which he “misses very badly.”
Powell also no longer has bodyguards – which he says were conspicuous even when he simply wanted to walk down a New York City block to buy a hotdog.
The former four-star general spoke candidly before several thousand at Reitz Arena, drawing on a background which included being the Secretary of State to President George W. Bush and National Security Advisor to President Ronald Reagan, his time in ROTC, his 35 years in the U.S. Army and his work in education, to share his viewpoint on current events, economics, politics and technology.
While Powell called the global situation “troubling,” he advised the audience to look at the world from a different perspective: to remember that no nation in the world can destroy the U.S. and that terrorists cannot change who Americans are.
He attributed the Arab Spring to a lack of jobs rather than Islamic fundamentalism and called economic development a “powerful force.”
“Destiny is now in their hands, not ours,” Powell said, mentioning the situations in Iraq and Afghanistan. “We’ve done all we can in the two countries.”
Regarding domestic politics and the recent shutdown of the Federal government, he referenced the founding fathers, who were able to make the Constitution in a relatively short period of time and who realized “only through compromise, you get consensus.”
Powell said that he wished he could “pour” some of the “optimism that is at the heart of the American experience” back into Washington.
Without the aid of a teleprompter or script, Powell first talked about his transition period after public service, joking that he was no longer the “No. 1 diplomat.”
At one point he talked about his experience with social media and feeling too old sign up for any accounts.
When he discovered that someone had been posing as him, he joked that he originally thought about suing Mark Zuckerberg – until he was told his impersonator had 30,000-something friends.
After his roughly hour-long lecture, Powell answered student-submitted questions about topics ranging from rumored film biopics and which political party he sides with – Republican.
The lecture series is supported by 1974 Loyola alum and chairman of the university’s Board of Trustees, Ed Hanway, and his wife Ellen. Last school year’s event, held April 9, featured Tony Blair, the former prime minister of Great Britain and Northern Ireland.
PrevNext