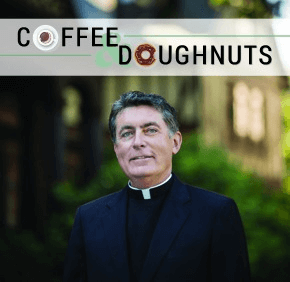 CR: What are your Catholic roots?

Father Linnane: All four of my grandparents were born in Ireland. I was born and raised Catholic (in Medford, Mass). I went to Catholic schools all of my life, until I did my Ph.D. I’ve been a Jesuit for 38 years.

CR: Catholic Schools Week is Jan. 31-Feb. 6. What lessons do you carry from your start in Catholic schools?

Father Linnane: St. Raphael School opened the year I started first grade. There was great excitement, and I just remember feeling how invested the church was in me. Service to  others … the importance of integrating knowledge and spirituality … and the discipline, that’s one of the hallmarks of Catholic education. In order to advance as a person, as a Catholic, as a student, requires discipline.

CR: What was behind your sabbatical last semester?

Father Linnane: When I became president (in July 2005), I thought in terms of a 10-year commitment. I’m now in my 11th (year) and it seemed there were a number of things I wanted to work on, and the trustees wanted me to continue. It would just be a good opportunity to step away, do some other things, reflect, think about the next phases of my life. It was an incredibly rich experience; it really has recharged me, to stay on for a few more years.

CR: What did you do?

Father Linnane: I spent the fall semester in London, at Heythrop College, the school run by the Jesuits (where he studied in 1996-97); I was able to connect with my own work in philosophy and theology. I also spent three weeks in Australia in the summer, at a conference for presidents of Jesuit universities around the world. It was beneficial to reflect on our shared ministry and values.

CR: Dysfunction in Baltimore was magnified in the last year. What does Loyola do to convince its students they are part of the solution?

Father Linnane: Our sense of community service, of justice, engages almost 75 percent of our undergraduates. They perform service, primarily in those parts of the city that are most in need. Whether working in food programs with Catholic Charities, or in the schools, many of our students see that they have an obligation to serve.

What can we contribute to more just circumstances, but also to understand the reasons behind the violence and the dysfunction? A lot of times, our students don’t have an understanding of their own privilege. Not everyone gets to go to a school like Loyola. What are the social structures that keep people from advancing, that lead to enormous frustration and marginalization?

CR: Who is your favorite saint?

Father Linnane: There are many I turn to, yet I would say St. Augustine. He’s such a brilliant theologian. He contributed so much to our understanding of God’s mercy and forgiveness, and the way grace allows us to become more full, better persons.

Years ago I read Peter Brown’s book, “Augustine of Hippo,” and thought, “this could be a novel.” It’s amazing, the things he did, the circuitous way he came to know the God of Jesus Christ and to move into a life of service and dedication. It’s a dramatic story that speaks to all of us, about the possibilities of renewal and reconciliation, and moving away to the unexpected.