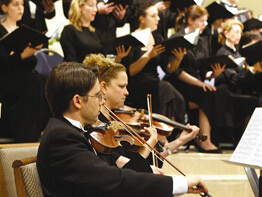 A steady spring rain may have darkened the skies and soaked some parishioners, but it failed to dampen the musical exuberance that sparkled inside St. Louis Church, Clarksville, June 3.

Soon after Edward Polochick confidently raised his white baton to lead an orchestra and choral singers from Concert Artists of Baltimore, the musicians filled the newly built church with the thoroughly American sounds of Aaron Copeland.

Violinists and cellists furiously guided their bows over strings while a pianist supported their efforts and 21 voices harmonized as one. Viola players, a bassist, a flautist, a clarinet player, a bassoonist and a percussionist all added their talents while outfitted in black and white tuxedos or black dresses.

In a buoyant version of the Shaker tune, “Simple Gifts,” the artists reached a regal crescendo that had the conductor sweeping his arms so powerfully in time to the memorable music that it tousled his hair.

More than 650 people in the audience showed their approval with warm applause while the performers smiled and nodded their appreciation.
The free classical music concert was the third the parish has offered since the new church was dedicated more than a year ago. The earlier concerts, undaunted by bad weather, each attracted nearly 1,000 people.

Monsignor Joseph Luca, pastor, said he hopes St. Louis will become a hub for classical musical performance in Howard County and that the new building gives the parish the opportunity to do just that.

“Down through the centuries the Catholic Church has always been a great patron both of the visual and musical arts,” said Monsignor Luca. “It’s in that spirit we would like to offer these concerts to all the people of our community.”

When the new church was being designed, Monsignor Luca worked closely with parish leaders to make sure the space would support good music for liturgy and other special events. The floors are largely unadorned with carpeting that would absorb sound and the interior features a large open space that allows sound to reverberate naturally without echoes.

During intermission at the June 3 concert, Frederick J. Beaudoin, outgoing director of the St. Louis choir, called the acoustics “fantastic.” When compared with the sound in the former church, a carpeted structure with padded seats, Mr. Beaudoin said it’s “like night and day.”

“The sound in the old church just dropped off the end of the earth,” he said.
Donna Douglass, concert coordinator and a member of the parish choir, agreed that the new church acoustics are superior.

“From the back of the church, you can hear the tiniest pianissimo from a violin,” she marveled.

Ms. Douglass said she hopes the concert series will expose more people to classical music. The quality of the performers showcased so far, including a brass quintet, a string trio and flute quartet, a pan quartet from Italy and a Baltimore organist, has been top-notch, she said.

“One parishioner said you are going to have to pay $70 at the Kennedy Center for something of this quality,” she said, noting that the parish choir has also been featured at some of the concerts – accompanied by the rich sounds of a brand-new Rodgers digital organ that includes pipes positioned at the back of the church.

The June 3 concert was special because it was dedicated to Mr. Beaudoin, who has served 22 years as choir director. Mr. Beaudoin received his musical training at the New England Conservatory and studied with Boris Godowsky at the Longy School of Music in Cambridge, Mass.

“I think one of Fred’s greatest contributions is his incredible understanding of liturgy and a real knowledge of the tradition of classical music that began as early church music,” said Ms. Douglass. “He is preserving the musical legacy of the historical Catholic Church.”

Ms. Douglass said she expects the concerts at St. Louis to grow in popularity. Free will offerings are accepted to help pay for the events and a parishioner has made a generous donation to help underwrite the expense.
“We have perfect setting for classical music,” she said. “The concerts are a wonderful way to reach out to the community beyond St. Louis parish.”