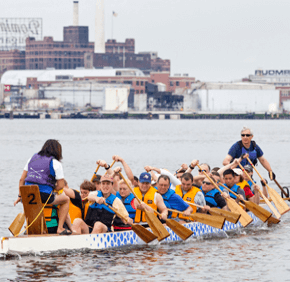 By Maria Wiering
mwiering@CatholicReview.org
On Saturdays at 9 a.m., a group of Baltimore City Catholics climbs into a Chinese-style Dragon Boat that eases into the harbor. They’re among 34 teams practicing weekly for Catholic Charities’ Dragon Boat Races, a biennial event which will take place Sept. 6 at Baltimore’s Inner Harbor.
This particular group, the Downtown Catholic Cluster team, is the first parish-based team to compete since the races’ 1998 inception.
The Dragon Boat races support a good cause (in 2012, the races yielded $700,000 for Catholic Charities), but for Baltimore parish leaders, the races are also an opportunity to draw more Catholics into parish life and gain visibility, said Chris McCullough, pastoral associate of St. Vincent de Paul Parish in Baltimore City.
As team captain, McCullough, 49, is coordinating a group of Catholics from a cluster of five Baltimore City parishes: St. Vincent, St. Alphonsus, the Basilica of the National Shrine of the Assumption of the Blessed Virgin Mary, Corpus Christi and St. Ignatius of Loyola.
“It’s a way to be present to the greater Baltimore community and express our presence in the city, and maybe be able to say … ‘If you’re looking for a place to go to Mass, here’s our Mass times,’” McCullough said.
See video of Harkins Builders practicing in 2012.
Monsignor Arthur F. Valenzano, the basilica’s rector, initially proposed a cluster-wide team as a means to appeal to young adults and build solidarity among the parishes.
“Giving back is something young professionals are attracted to,” McCullough said.
The 25-member team ultimately attracted members ranging in age from their mid-20s to 65.
Daria Driver, a parishioner of Corpus Christi in Bolton Hill, joined the team because she loves being on the water and helping people in need, she said. The 34-year-old paralegal also hopes her participation shows spectators that young adults are active in the church. The 2014 races are expected to draw 10,000 people to Baltimore’s Inner Harbor.
“I love it. We’re having a great time,” Driver said. “It feels good to get out there, represent our parish and faith, and be young faces out there.”
The team is also strengthening the relationship between cluster parishes, McCullough said. For the last four years, the cluster’s pastors and lay leaders have met regularly to explore ways to share ministries and collaborate effectively.

Some ducks paddle into the picture as the Center City Parishes Dragon Boat team and the Air Force team practice for the Dragon Boat Races at the Baltimore Marina July 26. (Tom McCarthy Jr. | CR Staff)
Like all Dragon Boat teams, the city parish team is paired for fundraising and pre-race activities with a Catholic Charities program: Basilica Place apartments, affordable senior housing in Midtown. The partnership may inspire ongoing volunteer opportunities for cluster parishioners, McCullough said.
The sprint-like races draw teams from Baltimore companies and nonprofit organizations. T. Rowe Price won the Dragon Cup in 2012 and tied for first in 2008. Brown Advisory won in 2010.
William J. McCarthy Jr., Catholic Charities’ executive director, said the races build participants’ teamwork, foster friendly competition and connect the community to Catholic Charities’ work and the people the agency serves. He said it was “exciting” to see parishes and other Catholic organizations involved.
The Archdiocese of Baltimore, Baltimore-based Catholic Relief Services and Monsignor Slade Catholic School in Glen Burnie are among other Catholic institutions competing in this year’s races. Other area Catholic schools and universities have competed in the past.
Also see:
Lots of winners at Dragon Boat Races
Employees all aboard for Dragon Boat Races
PrevNext