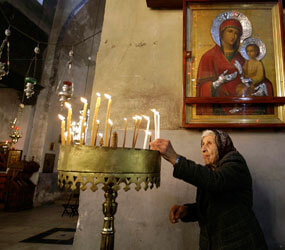 JERUSALEM – The city of Bethlehem has been nominated as a UNESCO World Heritage site by the Palestinian Ministry of Tourism and Antiquities.

“This is a momentous event for Palestinians,” Hamdan Taha, Palestinian assistant deputy minister for antiquities and cultural matters, told Catholic News Service in a Feb. 8 phone interview. “Recognition of this site as World Heritage is important to the people of Bethlehem as it is to more than 2 million Christians around the world.”

If the nomination is approved, Bethlehem would be the first Palestinian site to be recognized by UNESCO. But the plan faces a potential roadblock because Palestine is not yet recognized as a state and Palestinians are not yet members of UNESCO’s World Heritage Committee, which will consider that application. Palestinian leaders, however, said they have applied for membership.

At a news conference Feb. 7 Tourism Minister Khouloud Daibes said the request is part of the campaign to press for international recognition of an independent Palestinian state.

She said the bid is supported by the Franciscan Custody of the Holy Land, the Greek Orthodox Church, and the Armenian Church, which share custody of the holy site.

The nomination is an overdue recognition of the “exceptional international value” of Bethlehem as a historic site, Taha said.

He noted that the submission of the nomination is the first step toward final acceptance of Bethlehem as a World Heritage site. A decision is expected in July 2012.

Taha said the Palestinians had compiled a list of about 20 other sites they would like to submit for consideration for as World Heritage sites as well, including the old town of Hebron, Jericho, the Dead Sea and the Qumran Caves, where the Dead Sea Scrolls were discovered. Inclusion of some of the sites would most likely be opposed by Israel, which also claims some of them as integral parts of its Jewish heritage and which currently maintains control on them.

Nevertheless, Taha remained confident that the nomination would be accepted.

“We are confident these are integral parts of Palestinian heritage and they are inside Palestinian areas which were occupied in 1967. We hope that this year we will also see progress on our Palestinian state within the 1967 boundaries,” he said.