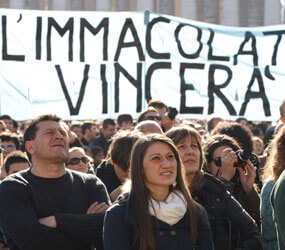 ROME – The church should fear the sin of its own members more than hatred against Christians, Pope Benedict XVI said.

While the church has suffered from persecution throughout its history, it “is supported by the light and strength of God” and will always end up victorious, he said.

Overcoming trials and outside threats shows how the Christian community “is the presence, the guarantee of God’s love against all ideologies of hatred and selfishness,” he said on the feast of the Immaculate Conception Dec. 8.

“The only danger the church can and should fear is the sin of her members,” the pope said.

Pope Benedict marked the feast day by making an afternoon visit to a statue of Mary erected near the Spanish Steps.

He went from the Vatican to the heart of Rome’s tourist and shopping district to pay homage to Mary by praying before the statue, which commemorates Pope Pius IX’s proclamation in 1854 that Mary, by special divine favor, was without sin from the moment she was conceived.

The pope offered a large basket of white roses, which was then set at the foot of the column topped by the statue. He also greeted and blessed the infirm and their caregivers.

He told the crowds gathered for the event that Mary is “free from every stain of sin (and) the church is holy, but at the same time is marked by our sins.”

For that reason, Christians often turn to Mary for help and encouragement in living a truly Christian life, he said.

She also gives hope, “which we really need, especially at this very difficult time for Italy, Europe and different parts of the world.”

“Mary helps us see that there is a light beyond the blanket of fog that seems to envelop reality,” he said.

Earlier in the day, the pope led the Angelus prayer with those gathered in St. Peter’s Square.

Before the prayer, the pope said that, like Mary, “we, too, are given the ‘fullness of grace’ that we must let shine in our lives.”

God “has blessed us in Christ with every spiritual blessing in the heavens, as he chose us in him, before the foundation of the world, to be holy and without blemish before him,” the pope said, citing St. Paul’s Letter to the Ephesians.

“In her sinless perfection, Mary is a great sign of hope for the church and for the world, a sign of the marvels that God’s grace can accomplish in us, his human creatures,” the pope said.

He asked that during the days of Advent, people prepare to welcome Mary’s son into their lives and hearts.