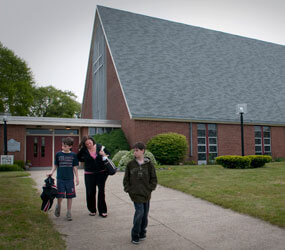 BRAINTREE, Mass. – Although the Archdiocese of Boston has received official word from the Vatican denying the appeals of nine churches shuttered by the archdiocese in 2004, round-the-clock protests continue at several of the churches.

In a July 15 statement, archdiocesan spokesman Terry Donilon said the archdiocese has received Vatican decrees regarding the appeals of the parishes – St. Frances Xavier Cabrini in Scituate, St. Jeremiah in Framingham, St. Anselm in Sudbury, Our Lady of Lourdes in Revere, Infant Jesus-St. Lawrence in Brookline, Star of the Sea in Squantum, St. Michael in Lynn, Ste. Jeanne d’Arc in Lowell, and St. James the Greater in Wellesley. A 10th parish did not appeal.

“While our initial review of the decrees appears to confirm that the Apostolic Signatura has affirmed the earlier decision of the Congregation of the Clergy regarding these closed parishes we look forward to a formal review of the translated text (from Latin to English),” Donilon’s statement said in part.

Peter Borre, co-chairman of the Council of Parishes, a group formed to appeal the closures, said in May that he had learned of the content of the Vatican decrees.

However, Donilon said at that time that the archdiocese had not received the official decrees, and deferred comment until it possessed the decrees from Rome.

The Vatican’s decision means the process the archdiocese used to close the parishes complied with canon law, leaving the parishes with no other recourse within the church.

After the closings, the Council of Parishes appealed unsuccessfully to the archdiocese and then took the case to the Vatican.

The Congregation for Clergy, the Vatican office charged with resolving these appeals, upheld the closings. Then, the group appealed to the Apostolic Signature, the Vatican’s highest court.

Round-the-clock vigils have been held at St. Jeremiah, St. James and St. Frances, as well as St. Therese Parish in Everett and Our Lady of Mount Carmel Parish in East Boston.

In a July 21 interview with The Pilot, Boston’s archdiocesan newspaper, Donilon reaffirmed the archdiocese’s commitment to “seek a conclusion (to the vigils) that is peaceful and prayerful.”