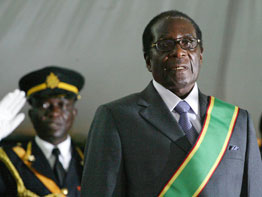 CAPE TOWN, South Africa – Zimbabweans are in widespread despair as the country’s longtime ruler Robert Mugabe was sworn in as president for a sixth term, a Catholic Church official said.

In rural areas of the southern African country, the June 27 runoff election, in which Mugabe was the only candidate, “was masterminded by thugs” loyal to the ruling party, said Alouis Chaumba, who heads the Catholic Commission for Justice and Peace in Zimbabwe. Mugabe was sworn in June 29.

“People know if they disobey they will be beaten up,” Chaumba said in a June 30 telephone interview with Catholic News Service. “The level of brutality in the rural areas has reached unimaginable proportions.”

While many people in Zimbabwe’s cities did not turn up at the polling stations, people in rural areas “were warned that they had to go and vote,” he said.

“They were not allowed into the booths on their own but were made to tell the electoral officers that they were unable to read or write and then were given folded ballots (for Mugabe) to hand in,” he said.

“A blanket of fear engulfs the countryside,” said Chaumba, who visited numerous villages June 29. “Where there is no rule of law, anything can happen.”

In high-density hostels in Harare, the capital, people were told they would be evicted if they did not vote, he said.

Opposition leader Morgan Tsvangirai, who withdrew from the runoff election because of the violence, won the most votes in the first round of presidential voting in March but not enough for an outright victory.

Human rights groups said opposition supporters have been the targets of brutal state-sponsored violence since March, leaving more than 80 dead and 200,000 displaced.

Zimbabwe’s electoral commission reported more than 2 million votes cast for Mugabe, and 233,000 for Tsvangirai, whose name was still on the ballot although he withdrew from the election June 22, according to The Associated Press.

The government reported the turnout at about 42 percent, with about 131,000 ballots spoiled, apparently in protest. Neither candidate got credit for the spoiled ballots.

Living conditions in the country are “dire,” Chaumba said.

Since the first round of elections, shortages of basic goods have worsened, public services have come to a virtual standstill, and power and water outages have continued daily.

Bishop Kevin Dowling of Rustenburg, South Africa, said in a July 30 telephone interview that he hopes governments in the African Union “have the courage of their convictions to speak out against Mugabe” at the June 30-July 1 summit of the 53-nation bloc in Egypt. Mugabe is attending the meeting.

Zimbabwe’s Jesuits said Mugabe’s campaign claim that “only God can remove me from power” is outrageous.

“In making such an outrageous claim, Mugabe, who likes to be known as ‘a devout Catholic’ goes completely against the teaching of the Catholic Church and the church’s positive attitude toward democracy,” the Jesuits said in their late June newsletter.