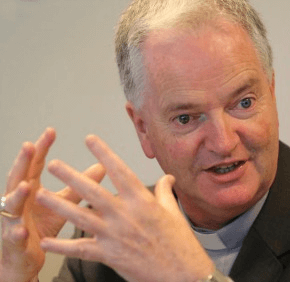 AUSTIN, Texas – The juxtaposition was striking.

During the early evening of March 11, 59-year-old Bishop Paul Tighe worked his way through the hallways of the Austin Convention Center, weaving his way through thousands of young people who were in town attending the South by Southwest Festival, more commonly known as SXSW.

This year’s festival began March 10 and will conclude March 19.

“On one level, it’s kind of strange because you’re wandering around the place,” said Bishop Tighe, who is currently adjunct secretary of the Pontifical Council for Culture. “You’re certainly the only one in a collar and you’re possibly the only one with white hair.”

When Bishop Tighe walked the convention floor, many of the attendees had recently emerged from panels hosted by tech giants, comedians, actors, politicians and more.

As they passed by Bishop Tighe, no one seemed to realize they had just encountered one of the Vatican’s most influential communicators during the last decade.

Bishop Tighe was at the festival to be part of a panel called “Compassionate Disruption,” which was hosted March 12 at the Hyatt Regency. Bishop Tighe was joined on the panel by Helen Osman, former chief communications officer for the U.S. Conference of Catholic Bishops and Michael Hertl and Christoph Krachten, who are digital media innovators for the Catholic Church in Germany.

At a festival known for its music concerts, movie premieres and tech company displays, the Catholic Church certainly stuck out.

“People might be surprised there’s a church presence, but there’s so many places where the church is not invited any longer that it’s important to respond positively to invitation,” Bishop Tighe told Catholic News Service. “Even if it looks a bit different or not like our usual gatherings.”

Bishop Tighe is no stranger to speaking at unconventional festivals. He once spoke in front of 12,000 people at the Burning Man arts festival in Europe.

He added: “Despite all the sophistication, coolness, sarcasm and the irony at an event like this, I think if you speak with authenticity, there’s still a possibility of touching people’s hearts.”

A faith session at SXSW is still a relatively new concept, said the interactive festival’s director, Hugh Forrest. Forrest said he likes panels that take attendees out of their comfort zones.

“I think it is an outlier, but I think the outliers here are what makes ‘the thing’ so interesting,” Forrest told CNS. “A faith-based session at a technology event that’s focused on start-ups? That’s really neat. I love that we have the capacity to host sessions like that which attract people with strong faiths. I hope it attracts people maybe who don’t, but are interested in this stuff.”

Forrest said he sees the Bishop Tighe appearance as the start of a potentially longer relationship with the Catholic Church. He dreams that one day Pope Francis might Skype with an audience at SXSW.

“This pope and the current Vatican is embracing technology,” Forrest said. “It makes sense to connect with this crowd. They are in a sense embracing disruption very significantly. I think the pope has a leadership role few other people have. We like to showcase innovative, creative leaders.”

The first start was Bishop Tighe, who was born in Navan, County Meath, in Ireland, and is a former director of public affairs for the Archdiocese of Dublin. He is largely known for his eight years as secretary of the Pontifical Council for Social Communications. The Catholic Church’s presence in digital media increased heavily during that time.

In 2012, Pope Benedict XVI launched a massively popular Twitter account, which was later transferred to Pope Francis. A pope app for mobile devices also debuted in recent years. Then-Msgr. Tighe was named adjunct secretary of the Pontifical Council for Culture in late 2015 and consecrated a bishop Feb. 27, 2016.

Despite his official move out of Vatican communications, Bishop Tighe maintains a deep interest in the topic.

The day before the “Compassionate Disruption” panel, Forrest acknowledged it was a gamble and that he didn’t know what kind of crowd would show. The bet appears to have paid off for the festival. During one point at the festival, #GODatSXSW was Twitter’s No. 1 trend in Austin. On a day that featured former Vice President Joe Biden, billionaire and tech leader Mark Cuban, and other celebrities, being such a topic of discussion was no small feat.

Questions from attendees of the panel ranged from whether the Catholic Church should position itself as a brand and how the church can use digital media for good.

For several decades, SXSW has been a constantly evolving festival. Now, it could be known as a place for fertile faith discussions.

A sizable crowd attended the session inside a ballroom at the Hyatt Regency. The session was the result of years of discussions between Osman and Forrest. Osman, who lives in Austin and served the U.S. bishops from 2005 to 2015, led the panel discussion.

“Hopefully the conversation will continue,” Osman told attendees at the end of the panel. “South by Southwest has been very encouraging of us to talk about coming back in 2018.”

Bishop Tighe said young people are at the heart of the festival, which boasts thousands of ambitious techies attempting to launch start-up Web platforms. For some, it is the opportunity to get the attention of investors. It’s a high-pressure situation for many.

“The compassionate disruption is to say,” Bishop Tighe added, “fundamentally, you’re a person of value, a person of dignity and worth. God loves you and cares for you whether you pitch well or not.”

Priests and marriage: Pope’s response not so new after all