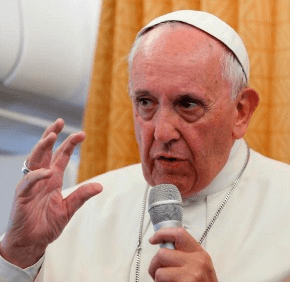 ABOARD THE PAPAL FLIGHT FROM ARMENIA

– Catholics and other Christians not only must apologize to the gay community, they must ask forgiveness of God for ways they have discriminated against homosexual persons or fostered hostility toward them, Pope Francis said.

“I think the church not only must say it is sorry to the gay person it has offended, but also to the poor, to exploited women” and anyone whom the church did not defend when it could, he told reporters June 26.

Spending close to an hour answering questions from reporters traveling with him, Pope Francis was asked to comment on remarks reportedly made a few days previously by Cardinal Reinhard Marx, president of the German bishops’ conference, that the Catholic Church must apologize to gay people for contributing to their marginalization.

At the mention of the massacre in early June at a gay nightclub in Orlando, Florida, Pope Francis closed his eyes as if in pain and shook his head in dismay.

“The church must say it is sorry for not having behaved as it should many times, many times – when I say the ‘church,’ I mean we Christians because the church is holy; we are the sinners,” the pope said. “We Christians must say we are sorry.”

Changing what he had said in the past to the plural “we,” Pope Francis said that a gay person, “who has good will and is seeking God, who are we to judge him?”

The Catechism of the Catholic Church is clear, he said. “They must not be discriminated against. They must be respected, pastorally accompanied.”

The pope said people have a right to complain about certain gay-pride demonstrations that purposefully offend the faith or sensitivities of others, but that is not what Cardinal Marx was talking about, he said.

Pope Francis said when he was growing up in Buenos Aires, Argentina, part of a “closed Catholic culture,” good Catholics would not even enter the house of a person who was divorced. “The culture has changed and thanks be to God!”

“We Christians have much to apologize for and not just in this area,” he said, referring again to its treatment of homosexual persons. “Ask forgiveness and not just say we’re sorry. Forgive us, Lord.”

Too often, he said, priests act as lords rather than fathers, “a priest who clubs people rather than embraces them and is good, consoles.”

Pope Francis insisted there are many good priests in the world and “many Mother Teresas,” but people often do not see them because “holiness is modest.”

Like any other community of human beings, the Catholic Church is made up of “good people and bad people,” he said. “The grain and the weeds – Jesus says the kingdom is that way. We should not be scandalized by that,” but pray that God makes the wheat grow more and the weeds less.

Pope Francis also was asked about his agreeing to a request by the women’s International Union of Superiors General to set up a commission to study the historic role of female deacons with a view toward considering the possibility of instituting such a ministry today.

Both Sister Carmen Sammut, president of the sisters’ group, and Cardinal Gerhard Muller, prefect of the Congregation for the Doctrine of the Faith, have sent him lists of names of people to serve on the commission, the pope said. But he has not yet chosen the members.

As he did at the meeting with the superiors, Pope Francis told the reporters that his understanding was that women deacons in the early church assisted bishops with the baptism and anointing of women, but did not have a role like Catholic deacons do today.

The pope also joked about a president who once said that the best way to bury someone’s request for action was to name a commission to study it.

Turning serious, though, Pope Francis insisted the role of women in the Catholic Church goes well beyond any offices they hold and he said about 18 months ago he had named a commission of female theologians to discuss women’s contributions to the life of the church.

“Women think differently than we men do,” he said, “and we cannot make good, sound decisions without listening to the women.”