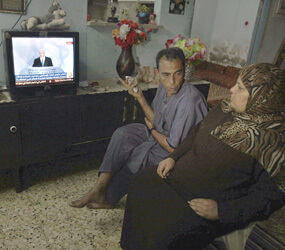 JERUSALEM – Although most Arabs did not accept Israeli Prime Minister Benjamin Netanyahu’s terms for accepting Palestinian statehood, in reality he could not have said anything different, said an official of the Jerusalem Interchurch Center.

“Personally I look at it as everyone trying to take a step forward,” said Yusef Daher, the center’s executive secretary, reacting to Netanyahu’s June 14 speech. “First (U.S. President Barack) Obama took a step. Netanyahu couldn’t say more than he did. He is in a very delicate condition with the (right-wing) coalition he chose, and he needs to change the coalition or we can’t move.”

In Cairo June 4, Obama called for a two-state solution to the Palestinian-Israeli conflict; an end to Israel’s expansion of settlements in Palestinian territories; and an end to Palestinian violence against Israel.

In his speech, Netanyahu accepted a limited, demilitarized Palestinian state if the Palestinians recognize Israel as the national home of the Jewish people. The demilitarization must mean no army, no control of airspace and “effective security safeguards,” said Netanyahu.

He also rejected dividing Jerusalem, opposed the right of return for Palestinian refugees displaced during the 1948 Arab-Israeli war, and said that although no new settlements would be built, construction in already existing settlements would continue.

Daher said he felt that everyone was “looking very carefully” at taking advantage of the opportunity to renew the peace initiative. However, that would require a new governmental coalition on the Israeli side, he said, as well as unity between Palestinian factions, Fatah and Hamas.

“If everybody is serious about easing the conflict we have to move forward,” he said. “The real intentions of both sides will soon be seen.”

Mazin Qumsiyeh, president of the Palestinian Center for Rapprochement Between People and a professor at Catholic-run Bethlehem University, was less conciliatory. In his blog, he said Netanyahu’s speech illustrated a “litany of lies, distortions and demands,” reminding him of past speeches by European colonial generals.

“Netanyahu says he does not want to rule over Palestinians but merely wants to keep our stolen lands and wants to control their airspace, water, entry and exit, and otherwise relegate us to Bantustans (black African homelands) in order to achieve the illusory security for him and the other colonizers/occupiers,” he wrote. “Netanyahu avoided all the vocabulary that would indicate any semblance of possibility of peace: Palestinian sovereignty/freedom, ending the occupation, complying with international law, obeying U.N. resolutions, respecting Palestinian rights.”

In Israel, public support for Netanyahu rose from 28 percent to 44 percent following his speech. According to results of a Tel Aviv University poll reported in Haaretz, 71 percent of Israelis approved of his speech but said they did not see any breakthrough in the peace process as a result.

For Israeli President Shimon Peres, the speech was “true and courageous.”

Palestinian political leaders were not as impressed.

“Benjamin Netanyahu spoke about negotiations but left us with nothing to negotiate, as he systematically took nearly every permanent status issue off the table,” Erakat said. “Nor did he accept a Palestinian state; instead, he announced a series of conditions and qualifications that render a viable, independent and sovereign Palestinian state impossible.”

Leaders of the Islamic militant group Hamas, which controls the Gaza Strip, called the speech “a slap in the face.”