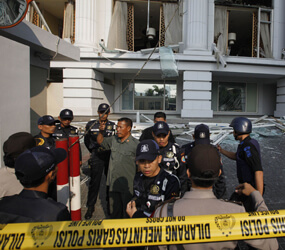 Father Yohanes Dwi Harsanto, executive secretary of the Indonesian bishops’ Commission for Youth, said he was deeply distressed over the tragedy that killed at least nine people and injured more than 60 others.

“We pray for the dead and those who are injured. Let us also pray for our nation. May God move the heart of this nation to uphold and maintain peace,” he told the Asian church news agency UCA News.

Father Harsanto expressed hope that all religious leaders would call on their respective followers to maintain national unity.

Shortly before 8 a.m. July 17, bombs exploded at the J.W. Marriott Hotel’s restaurant and on the second floor of the Ritz-Carlton Hotel.

Amidhan, head of the Indonesian Ulema Council, Indonesia’s top Muslim clerical body, told UCA News, “I am deeply concerned and strongly condemn the uncivilized act.” He said the council “does not tolerate such violence against innocent people.”

The Rev. Richard Daulay, general secretary of the Communion of Churches in Indonesia, a Protestant association, also condemned the attacks and said Protestants were praying for the victims.

The Marriott hotel in Jakarta has been bombed before, with 12 people killed in a 2003 car-bomb attack.

Indonesia, the world’s most populous Muslim nation, has a history of terrorist attacks, including the 2002 Bali bombings that killed 202 people, most of them foreigners.

No group has claimed responsibility for the attacks, but suspicion immediately fell on the al-Qaida-linked Southeast Asian terror network Jemaah Islamiyah, which was responsible for the Bali bombings.

Indonesian President Susilo Bambang Yudhoyono said the attack was carried out by a “terrorist group” and vowed to arrest the perpetrators.

“Those who carried out this attack and those who planned it will be arrested and tried according to the law,” he told a news conference.