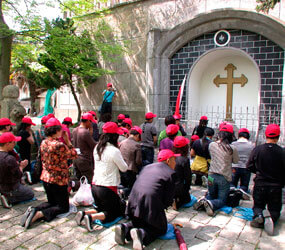 SHANGHAI, China – The popular Sheshan Marian shrine in Shanghai is preparing to handle a large influx of visitors as the month of Mary coincides with the start of the six-month Shanghai World Expo.

The international fair starts May 1, the beginning of the busiest month for the Marian shrine located on a hill in Shanghai.

Shrine authorities said they have received bookings from more than 1,000 pilgrims, mostly from people from neighboring provinces, for May 1.

Father Francis Li Fangyuan, pastor of Sheshan, said the shrine will increase its number of volunteers to 100 to help receive pilgrims and maintain order.

“We will only know by May” how many security guards and plainclothes police are to be stationed on the hill, he said.

As in past years, police will restrict vehicles from entering Sheshan Ring Road from April 30 to May 31.

In May 2008, local sources estimated 1,000 plainclothes and uniformed police personnel were stationed on the hill because Pope Benedict XVI’s mention of the site had sparked government worries that it could be swamped by hundreds of thousands of pilgrims.

Pope Benedict mentioned the shrine in his 2007 letter to Chinese Catholics, in which he also set May 24, feast of Our Lady, Help of Christians, as the world day of prayer for the church in China.

Auxiliary Bishop Joseph Xing Wenzhi of Shanghai is scheduled to celebrate an opening Mass for the Marian month April 30 at the Church of Our Lady, Help of Christians, located at the mid-level of the hill. The opening ceremony of the Shanghai World Expo will also occur that day.

On May 1, the shrine’s Marian statue will be carried in procession, after which Bishop Aloysius Jin Luxian of Shanghai is to celebrate Mass.

Reports say about 70 million local people and foreigners are expected to visit the Shanghai World Expo. One hundred and ninety-two countries and 50 international organizations are taking part in the exhibition.