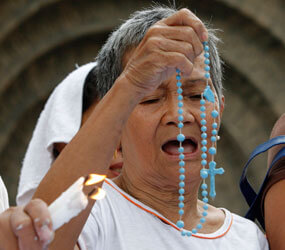 Vincentian Father Francisco Caluag Cruz flew from Tianjin to Xiamen, China, to celebrate Mass at the consulate March 29 for the families of two of those executed: Sally Villanueva, 32, and Ramon Credo, 42.

The Asian church news agency UCA News reported that the same day, the Philippine bishops’ commission for migrants and the Archdiocese of Manila conducted a prayer vigil.

Father Edwin Corros, head of the bishops’ commission for migrants, called on the Philippine government to immediately act to save other Filipinos on China’s death row. Philippines has abolished the death penalty.

“They should explore all means to save the others so this won’t happen again,” said Father Corros after celebrating a Mass in Manila.

An alliance of church and civil organizations had written a letter of appeal to Chinese President Hu Jintao asking for compassion for the three Filipinos.

The group said the convicts “are victims of larger drug syndicates who take advantage of the unawareness, vulnerability and desperation of our people.”