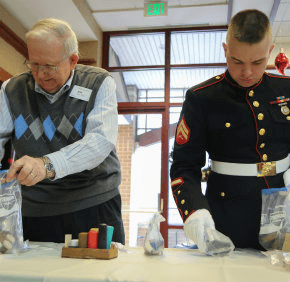 By Jessica Marsala
jmarsala@CatholicReview.org
CATONSVILLE – Jim Mullis, John Chasse and about eight others have spent some 800 hours this year making wooden toys for children.
They are not elves in Santa Claus’ workshop, but rather residents of the Charlestown retirement community. Mullis and Chasse built the toys as part of the Charlestown Wood Shop, one of the community’s 300-something clubs, hobbies and activities.
The 100 toys, which included wooden cars, trucks and airplanes, puzzles, doll beds and Mullis’ personal favorite, “wiggly fish on wheels [which] as you pull on the wheel [string] the fish wiggles its tail back and forth,” will be donated to children in need as part of the U.S. Marine Corps’ Toys for Tots program.
“Typically I come down most every morning, say 8 to 11,” said Mullis, who has organized the efforts of those who make the toys, some without any previous experience, the past three years. “We have three or four people who come down on a regular basis like that. But then people will drop in at various times.”
Chasse, who chairs the wood shop and who has been a Charlestown resident for about four years, prefers to build wooden puzzles as well as trucks.
“I like the things that help the kids learn, use their imagination and learn,” Chasse said.

He spoke fondly of toys similar to the trucks because they are durable and “don’t have a lot of bells and whistles.”
Some of the toys are more special than others.
The little wooden cars, appropriately named “pocket cars,” were built by resident Tom Houghton, who died Dec. 7, a day after having a heart attack.
“He was active up until the very end,” Mullis said of Houghton’s involvement in the shop.
The wood shop put the toys on display Dec. 12 in the Cross Creek Lobby of the community for residents to see before the Marines came to collect the donations.
One resident who came to look at the exhibit was Elizabeth Lange, whose husband, Robert, made one of the toys.
Chasse described the effort as a “gift from one generation to other.” Mullis described the spirit of altruism at play – and work.
“I just enjoy giving to other people and I enjoy doing things for other people,” Mullis said of being a part of the wood shop, which also helps out residents with repairs. “We just do it as to give back to the community that’s given us so much.”
Also see:
Monsignor Miller, ‘Mountain of a Man,’ laid to rest
Ellicott City parish celebrates long history
PrevNext