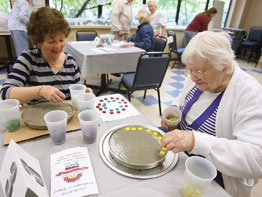 Despite the rain and cold on May 16, the young-at-heart residents of Charlestown Retirement Community in Catonsville laughed and danced the evening away beneath a tent on the field in front of Charlestown Square.

The joyous celebration, which included refreshments and music performed by the Radio King Orchestra, was the kick-off for a week of festivities honoring the community’s 25th anniversary.

Charlestown was developed on the campus of the old St. Charles Seminary in 1983 by John Erickson, founder, chairman, and chief executive officer of Erickson Retirement Communities.

Patrick Deering, chairman of the Charlestown Board of Directors and former St. Mary’s Seminary board member, told guests at Friday’s celebration a little about Charlestown’s beginnings. He said Mr. Erickson took his vision for the shut-down campus to the St. Mary’s board, which had been contemplating future plans for St. Charles. The retirement community Mr. Erickson established there became the first of the now 18 campuses across the nation.

Mr. Erickson, who was honored earlier in the day with a statue at Charlestown, addressed residents, staff, and dignitaries at the evening celebration.

“We’re making a difference in the world that is valuable,” he added later in his address, “and God blesses that.”

Father Larrivee said because Charlestown was the first community of its kind, no one knew if it was going to work. The community was modeled after the typical college campus, with all of the necessary amenities in one place, he said.

“Most of it is independent living,” the chaplain explained. “These people live in their own apartments and do their own thing. But then there’s also the assisted living and the nursing center.”

“We as the Sulpicians, the priests who owned (the seminary), feel happy about it,” Father Larrivee said. “The integrity of the buildings has been maintained. It’s used for a good purpose, caring for elderly people, and everybody won; 25 years later, it just vindicates everything (Mr. Erickson) thought.”

And the Charlestown chapel, Our Lady of the Angels, is an important part of that.

That chapel is what drew residents Mary Staylor and Regina Service to Charlestown.

“For the age of the people here, it’s a very active parish,” said Ms. Staylor, who said she has enjoyed every one of her 18 years living in the community.

Ms. Service, a resident of 23 years, said there are “so many volunteers working around the church and helping each other. There’s so much cooperation there.”

She said it’s rare for a retirement community to have a parish.

Ms. Staylor explained the parish was established about five years after Charlestown’s opening when “a group of Catholics here decided they would like it to be a parish. They established a parish council and worked hard. They had no problem getting volunteers.”

The chapel has both active Catholic and Protestant congregations, said Father Larrivee. “One of the things I’ve always told people is this chapel is used much more now than it ever was when it was a seminary and by many more people.”

Ms. Service said about 80 residents attend daily Mass, and the church is full every Sunday. “Others outside (Charlestown) come also,” she said. “It’s one of the most beautiful churches in America, just like walking right into a jewel box.”

He said, “When you look above (the statues of Joseph and Mary at the front of the church), you will see the Charlestown logo, the sunburst. The very logo, the very symbol of Charlestown, comes from inside the chapel.”