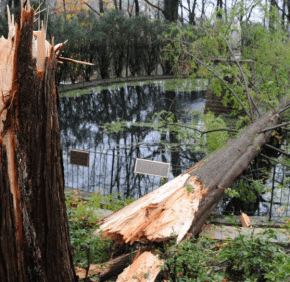 By Elizabeth Lowe and Maria Wiering

Catholic Charities of Baltimore programs “went on as normal,” serving the area’s most vulnerable throughout Hurricane Sandy, said spokesman Bob Keenan. Our Daily Bread in Baltimore served 350 people Oct. 29 and 610 people Oct. 30, in the midst of what had been dubbed “Frankenstorm,” as it combined both tropical and winter storms, affecting more than a third of the United States.

In anticipation of the storm, Maryland Gov. Martin O’Malley declared a state of emergency Oct. 26. On Oct. 28, President Barack Obama made federal aid available to the state.

Catholic Charities does not operate drop-in shelters. My Sister’s Place Women’s Center, located next to the Basilica of the National Shrine of the Assumption of the Blessed Virgin Mary, sheltered an additional 25 people on emergency cots Oct. 29, Keenan said.

Most Catholic Charities programs maintained power throughout the storm or restored it quickly with generators, he said. Seven of its 50 residences for Gallagher Services, which serves people with intellectual disabilities, were without power Wednesday morning.

“We are extremely fortunate to have an incredibly dedicated and committed staff who are heroic in the face of adversity and challenge, and the amazing support of selfless volunteers,” Catholic Charities CEO William J. McCarthy Jr. said in an Oct. 31 statement.

Beans and Bread, St. Vincent de Paul of Baltimore’s daily meal program for the homeless, also remained open throughout the storm, according to Teresa Eaton, St. Vincent’s communications director. The program served 61 clients Oct. 29 and 189 clients Oct. 30, below its daily average of 300 clients.

“I guess the storm didn’t have people walking on the roads even to come for a meal,” Eaton said in an email.

Schools in Baltimore City and Harford County remained closed Oct. 31, as did a handful of Catholic schools across the archdiocese.

Archbishop Curley High School in Baltimore, Bishop Walsh School in Cumberland and Sacred Heart School in Glyndon were closed Oct. 31, said Dr. Barbara McGraw Edmondson, superintendent of Catholic Schools. St. Michael the Archangel School in Overlea may be closed due to no electricity – calls were not answered at the school Oct. 31.

Parishes near the Chesapeake Bay suffered power outages, but no serious damage to parishes or schools has been reported to the Catholic Review.

Large fallen trees, including a century-old redwood, caused damage at the National Shrine Grotto of Lourdes at Mount St. Mary’s University, Emmitsburg, but all of the shrine’s statues were unscathed, including a statue of St. Francis of Assisi knocked from its pedestal. A mosaic of the Pentecost was also undamaged, although a tree smashed its supporting structure.

“To see the destruction and to see how these were saved is truly, truly remarkable,” he said.

According to Facebook, St. John the Evangelist in Severna Park was without power Oct. 31, but held 8:30 a.m. Mass in the church’s gathering space. All other parish and school activities were cancelled.

Nearby in Annapolis, St. Mary’s historic church was not affected by storm, according to a staff member. Likewise, Our Lady of the Chesapeake in Lake Shore lost power for about 12 hours, but did not suffer damage, a staff member said.

In the middle of the state, power outages forced St. John the Evangelist, Frederick, to close the parish office for two days, but the church was not damaged in the storm, said Bob Yolch, a parish volunteer.

“We don’t want our parishioners to put themselves in danger,” Donna Cook, the parish’s office manager, said in an email.

On Oct. 31, the area had 28 inches of snow, with several more inches expected.

The five churches that comprise Our Lady of the Mountains in Cumberland were unaffected by the storm, said its pastor, Capuchin Franciscan Father Gregory Chervenak. The area experienced only rain and wind, he said.

Baltimore Archbishop William E. Lori offered a Mass Oct. 29 for the safety of those in the archdiocese, especially those who are homeless, sick or vulnerable.

“I am very much praying through these hours for them, and I know I’m joined in that by my brother priests, and I talked to a lot of people yesterday, and I know they’re doing the same,” he said.