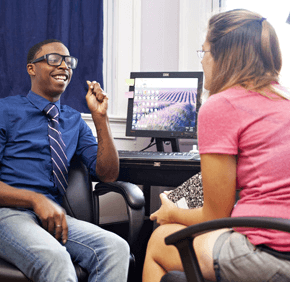 By Elizabeth Lowe
elowe@CatholicReview.org
Twitter: @ReviewLowe
Luther Thompson III sees the $12,000 grant awarded to Youth Empowered Society in Baltimore as a way to allow the organization to continue its mission.
“It gives us enough hope we can make it to another year,” said Thompson, 25, a YES peer staff member who was once homeless.
YES was one of eight organizations awarded a local or national Catholic Campaign for Human Development (CCHD) grant at the organization’s annual awards luncheon Aug. 21 at St. Francis of Assisi in Baltimore.
The CCHD, an effort of the U.S. Conference of Catholic Bishops, assists groups working to address the root causes of poverty.
During a November 2012 collection for CCHD, nearly $208,000 was raised at parishes across the Archdiocese of Baltimore, similar to the figures raised in the two previous years.
“The whole thing (CCHD’s mission) is to build communities to help people help themselves,” said Monsignor William F. Burke, pastor of St. Francis of Assisi and archdiocesan director of CCHD.
“Pope Francis has placed a great deal of emphasis on care for the poor,” said Baltimore Auxiliary Bishop Denis J. Madden, a supporter of CCHD’s efforts.
The 2013 grants total $190,000, with $140,000 awarded from a national pool and $50,000 locally. In 2011, a total of $319,000 in grants was presented, the highest in Baltimore’s CCHD history.
YES, which grew out of the Baltimore Homeless Youth Initiative youth leaders group, advocates through the city and state legislatures to provide safe, affordable housing and services to homeless or about-to-be homeless youths ages 14-25.
Since YES was founded last October, the organization has served 125 youths, said Lara Law, YES program director.
The YES Drop-In Center, the organization’s main resource, has a laundry facility, toiletries, clothing and bag lunches, among other amenities, available to youths, Law said. Additional services include a safe space to relax and access to a therapist and case manager.
“Many people have said ‘I never imagine somebody who is 15 or 21 could be homeless,’ ” Law said. “You think of them as part of a family unit.”
In addition to providing services, YES works to raise awareness about homeless youths, Law said.
Thompson, the YES peer staff member, wants to offer hope to homeless youths.
“I remember when I was out there and could not see the light at the end of the tunnel,” Thompson said. “We’re looking to empower our youths to live self-sufficient lives. YES truly cares about the youths we’re serving.”
By the numbers:
A total of $190,000 was awarded in grants this year, with $140,000 from a national pool and $50,000 locally.
National grant recipients: Youth As Resources, $70,000; Out For Justice, $25,000; CityWide Special Education Advocacy Project, Inc., $25,000; and Immigration Outreach Service Center, $20,000.
Local grant recipients: Arundel House of Hope, $13,000; New Lens, $13,000; No Boundaries Coalition, $12,000; and Youth Empowered Society, $12,000.
See also:
Young men hold dance to raise funds for pregnancy center
PrevNext