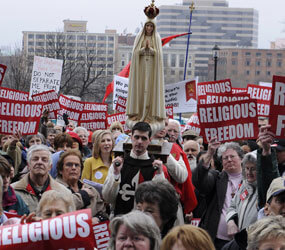 HARTFORD, Conn. – About 5,000 people gathered outside Connecticut’s state Capitol in Hartford March 11 to protest a bill – pulled from the Legislature the previous day – that would have given laypeople financial control of their parishes.

The state’s three Catholic bishops were among the protesters, many of whom wore “Religious Freedom” stickers while they voiced opposition to the shelved bill and any future legislation of its kind.

The Connecticut Catholic Conference had called on Catholics in the state to attend the rally as a way to “show support for the Roman Catholic Church and religious freedom in our state.”

The legislation, introduced March 5, was proposed by a group of Catholics concerned about the management of parish funds following the embezzlement conviction of a Connecticut priest. At the request of its proponents, the bill was withdrawn and is dead for this legislative session.

If it had not been killed, March 11 would have been a day of hearings on the measure, which Catholics had been encouraged to attend.

Just the fact that the bill was introduced is a concern, said Carl Anderson, supreme knight of the Knights of Columbus.

He told rally participants that the bill’s intent to give authority over church finances to elected lay boards would send a “dangerous message to all religious leaders that will chill freedom of religion and free speech.”

“In effect,” he added, “this bill states we cannot trust our priests and bishops. It is an insult to every priest in the state of Connecticut.”

In a blog on the event, a spokesman for the Knights of Columbus said Hartford Archbishop Henry J. Mansell told protesters the bill had embarrassed the state of Connecticut, making it appear to be a bigoted enclave.

The bill would have replaced an existing law that defines Catholic churches and congregations as nonprofit corporations operated by a five-member board of three clergy and two laypeople. Instead, the measure called for boards to be made up of seven to 13 laypeople elected by parishioners. It said the pastor would not be a member of the board and the bishop would serve as an ex officio nonvoting member.

“This is contrary to the apostolic nature of the Catholic Church because it disconnects parishes from their pastors and bishop,” Archbishop Mansell said in a statement read in parishes in the archdiocese March 7 and 8.

Bridgeport Bishop William E. Lori similarly criticized the proposed legislation in a statement read at Masses in his diocese, calling it “a thinly veiled attempt to silence the Catholic Church on the important issues of the day, such as same-sex marriage.”

Anthony Picarello, general counsel of the U.S. Conference of Catholic Bishops, said the bill was “not even close to constitutional” and violated the First Amendment “in at least two different ways.”

In a March 11 statement, he faulted the proposed legislation for targeting the “Catholic Church explicitly and exclusively” and for inserting “the state into theological controversies regarding how the church should be structured and governed.”

Mr. Picarello said the bill was a “vastly disproportionate response” to one case of one Connecticut priest who was convicted of embezzling parish funds; in a second case a priest resigned when an audit showed financial irregularities.

Mr. Picarello said the legislation went “far beyond swatting a fly with a sledgehammer” to taking the “sledgehammer to the whole house, using the fly as an excuse.”
In a joint statement March 10, the co-chairmen of the Connecticut Legislature’s Judiciary Committee, Sen. Andrew J. McDonald of Stamford and Rep. Michael Lawlor of East Haven, announced the cancellation of a scheduled March 11 hearing on the controversial bill.

“At the request of the proponents who are advocating this legislation, we have decided to cancel the public hearing for tomorrow, table any further consideration of this bill for the duration of this session, and ask the attorney general his opinion regarding the constitutionality of the existing law,” said McDonald and Lawlor, both Democrats and Catholics.