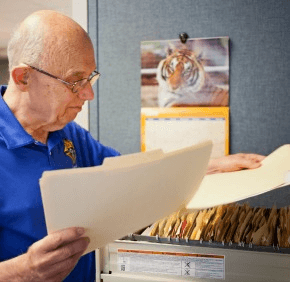 By Maria Wiering
mwiering@CatholicReview.org
CATONSVILLE – Glenn Whiteman, 81, spends three mornings each week at Baltimore County’s West Side Shelter helping men obtain clothing, bus passes and birth certificates.
A parishioner of St. Alphonsus Rodriguez in Woodstock, Whiteman, 81, volunteers through the Lazarus Caucus, an interdenominational nonprofit organization Catonsville-area churches formed in 2004 to help people who are homeless become self-sufficient.
Whiteman loves the work, but is there because of his faith, he said. It compels him to treat the men with dignity, despite their backgrounds or crimes.
“I don’t see anyone (volunteering) who would be here if it wasn’t for their faith,” he said.
Faith-based charity is the focus of the third annual national Fortnight for Freedom, which begins June 21 with 5:30 p.m. Mass at the Basilica of the National Shrine of the Assumption of the Blessed Virgin Mary in Baltimore. As chairman of the U.S. Conference of Catholic Bishops’ Ad Hoc Committee for Religious Liberty, Baltimore Archbishop William E. Lori will preside.
Archbishop Lori has urged Catholics to find a special way to serve during the Fortnight, which lasts through July 4. This year’s theme is “Freedom to Serve.”
Many parishes are hosting service and prayer opportunities.
Lazarus Caucus is an example of a faith-based organization that partners with Baltimore County’s branch of the Community Action Partnership, which runs the shelter.
With the motto “A Hand Up, Not a Hand Out,” the Lazarus Caucus has been instrumental in expanding the men-only shelter’s facilities and availability, said Luke Browning, a Lazarus Caucus founder, its current president and St. Alphonsus Rodriguez parishioner.
Browning, 58, and other Lazarus Caucus volunteers led a series of Ignatian spiritual exercises for the men at the shelter last year, and hope to do it again.
St. Alphonsus Rodriguez primarily supports the Lazarus Caucus’ work with volunteers and funding, Browning said. Other churches regularly donate meals and clothing.
The U.S. bishops launched the Fortnight in 2012 as a period of prayer, education and action responding to infringements on religious freedom, including the U.S. Department of Health and Human Services mandate that all employers, including most religious employers, pay for contraception, sterilization or abortion-causing drugs. Businesses and organizations, including Catholic hospitals and nonprofits, that do not comply with the mandate risk crippling fines.
The mandate was promulgated as part of the 2010 Affordable Care Act.
Nearly 100 lawsuits have been filed against President Barak Obama’s administration seeking an injunction against the mandate. The Archdiocese of Baltimore, Archbishop Lori and CRMedia are among plaintiffs in a class-action lawsuit that won an injunction against the HHS mandate June 4.
“In countless ways, religious freedom is being reduced in this country to the freedom to worship,” Archbishop Lori wrote in a May letter to priests, deacons and pastoral life directors in the archdiocese.
“When religious faith is lived out in public view, even for the benefit of others, it is seen as an infringement upon and not an aid to the common good,” he said. “The 2013 Fortnight for Freedom seeks to challenge this notion by calling for the preservation of our right to serve our sisters and brothers in accordance with the mission of our Catholic faith and the words of our Holy Father.”
In addition to helping homeless men, the Lazarus Caucus also gives area Christians a means to serve, Browning said.
“St. Francis said it, and who could say it better? ‘Preach the Gospel, and when necessary, use words,’ ” he said. “We try not to use words. We try to lead by example.”
Ron Gurganus, 55, has received help from the Lazarus Caucus, including work clothes for the construction job he hopes to find.
“They do treat you as a person,” he said. “They do more than their share.”
St. Alphonsus Rodriguez is hosting the first Woodstock Maryland Music Fest at 10800 Old Court Road, Woodstock, June 21 to raise funds for Lazarus Caucus’ work. John Sebastian of The Lovin’ Spoonful, who played a solo set at the original Woodstock Festival in New York in 1969, headlines the event. For more information, visit lazaruscaucus.org.
Volunteer during the Fortnight, but also throughout the year. Here are some faith-based places to volunteer.

St. Vincent de Paul of Baltimore –Provides community services to people suffering from the effects of hunger, homelessness and poverty in Baltimore.

My Brother’s Keeper – Provides quality social services in the Irvington Community, empowering residents and giving them the tools to build their own strengths. Email the director with dates and times that work for you.

Catholic Charities – Provides more than 80 programs that do everything from help people with developmental disabilities to feed the hungry to assist the elderly. Programs are located in several different counties and Baltimore City.

Helping Hands – a program of Catholic Relief Services, which offers a hands-on way for Catholics in the U.S. to tackle hunger around the world.

Caroline Center – Educates unemployed and underemployed women in Baltimore for careers with potential for advancement.

VIVA House -The work of VIVA house includes a meal program and a food pantry. They serve meals to approximately 200-400 people who live in the surrounding Baltimore neighborhood. Contact Willa Bickham and Brendan Walsh, 410-233-0488.

Many parishes as well as schools are also often looking for volunteers.