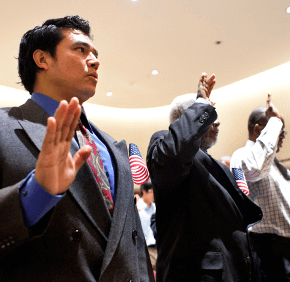 Nicolas Lombo, a parishioner of St. Joseph in Fullerton, was among 40 U.S. immigrants from 31 countries who became U.S. citizens during a Flag Day naturalization ceremony June 14 at the Maryland Historical Society in Baltimore.

“It was just a great feeling,” Lombo said after the ceremony. “I was thinking, after 15 years, finally.”

Lombo, 31, immigrated to the United States from Colombia with his family with he was 16. He was a talented swimmer, and his parents wanted to give him an opportunity to excel.

After attending high school in Houston, Texas, he swam for The University of Maryland, Baltimore County, before pursuing law school at Widener University in Wilmington, Del., and beginning his work as an attorney at T. Rowe Price. He said the process of becoming a resident and now a citizen went smoothly for him.

At the beginning of the ceremony, Burt Kummerow, president of the Maryland Historical Society, pointed to Maryland’s history and the War of 1812 as he addressed the candidates.

“With the anniversary of this war, it is a good reminder that this is primarily a nation of immigrants, people chose American citizenship or whose ancestors chose to make this nation their home,” he said.

Gregory Collett, Baltimore district director of U.S. Citizenship and Immigration Services, administered the Oath of Allegiance, which finalizes the candidates’ naturalization. One-third of the new citizens were children who had gained citizenship through their parents but were there to take the oath, he said.

“Of all the duties that we perform, this is the pinnacle of what we do day in and day out,” he told them. “This is also as old as the fabric of this country. It is what contributes to the shaping of our community and overall our nation.”

Lombo attended the ceremony with his wife, Jessa, who is an American citizen, and his mother, Maria Teresa Luque, who attends St. Michael the Archangel Parish in Overlea and teaches at Archbishop Borders School in East Baltimore. Nicolas Lombo is the first member of his family to go through the naturalization process; Luque hopes to become a citizen next year, she said.

Prior to the ceremony, the citizenship candidates toured the historical society, which displayed Francis Scott Key’s original manuscript of the “Star Spangled Banner,” the poem he wrote in September 1814, during the War of 1812. It was set to music and officially became the national anthem in 1931.

Before the oath, the candidates unfurled a 17-by-25-foot replica of a flag that flew during the bombardment of Fort McHenry during the War of 1812. They held the flag with their left hands and covered their hearts with their right while listening to the national anthem.

Lombo found the historical society a fitting venue for the ceremony, and said becoming a citizen in Baltimore has special meaning.

“I knew the history of the anthem and how it was written, and it kind of brings it all together,” he said.

Now that Lombo is a U.S. citizen, traveling outside the country will be easier, he said. He is also looking forward to voting in November’s presidential election. He’s never voted before, because he moved to the United States before reaching voting age in Colombia, he said.