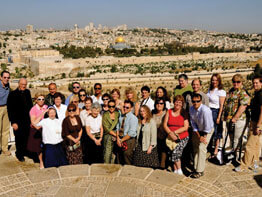 Sitting in a boat on the Sea of Galilee as a tour guide read Gospel passages about that exact spot was “pretty amazing” for Patricia Ruppert.

Equally inspiring was visiting a synagogue where Christ is believed to have worshipped, and walking the same holy ground where Jesus and his disciples would have trod in Jerusalem some 2,000 years ago.

“Sometimes we tend to think of Jesus as the prototypical Catholic,” said Ms. Ruppert, a religion and literature teacher at St. Joseph School in Cockeysville. “To put Jesus back into his roots and understand that he is from this place called Israel is very important. It’s something we often gloss over as Christians.”

Ms. Ruppert was one of 23 Catholic teachers from across the United States who participated in the advanced session of the “Bearing Witness” program in July. Heather Stritch, a theology teacher at St. Maria Goretti High School in Hagerstown, was the other attendee from the Archdiocese of Baltimore.

The Bearing Witness program included three days of lectures at St. Mary’s Seminary and University in Roland Park. Cardinal William H. Keeler and Bishop Denis J. Madden, urban vicar, were among those who participated in a wide range of discussions that touched on the Holocaust, reconciliation, forgiveness and the meaning of Israel to the Jewish people.

During a six-day stay in Israel, participants met with religious and government leaders. In Jerusalem, they Yad Vashem, the Jewish people’s memorial to the Holocaust. They attended Mass at the Church of the Holy Sepulcher and the Mount of the Beatitudes, and celebrated Shabbat with an Israeli family in the holy city of Safed.

Ms. Ruppert and Ms. Stritch took many photographs of the holy sites, which they intend to share with their students. They also plan to incorporate what they learned in their lesson plans.

Ms. Stritch said that the Bearing Witness program helps Catholics and Jews “enter into open dialogue and learn from one another.”

“We’re not there to convert,” she said. “We’re there to learn about each other.”

The advanced session of the Bearing Witness program is a joint partnership of the Anti-Defamation League, the U.S. Holocaust Memorial Museum and the Archdiocese of Washington.

The teachers who attended had previously participated in the original Bearing Witness effort, which explored the history of anti-Semitism, recent developments in Catholic-Jewish relations and practical strategies for teaching students about the Holocaust and anti-Semitism.