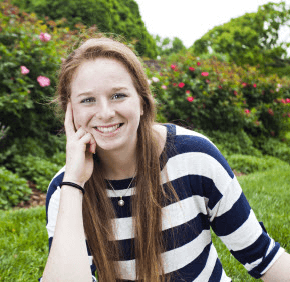 By Elizabeth Lowe
elowe@CatholicReview.org
Twitter: @ReviewLowe
ANNAPOLIS – Jennifer Broussard excelled in the classroom and on the basketball court during her four years as a student at St. Mary’s High School.
Broussard, who graduated May 23 with a 4.04 GPA, ranked eighth out of 94 students in her class. She took honors and advanced placement courses and is a member of the National and French National Honor societies.
“I can’t believe I’m moving on,” said Broussard, who will attend the University of Pittsburgh in the fall to purse a business-related major. “I’m excited to see the world.”
The parishioner of St. John the Evangelist in Severna Park said her faith has been deepened by attending Mass and Catholic schools – before St. Mary’s, Broussard attended her parish’s elementary school for nine years. She has also been moved by participating in a Kairos spiritual retreat, a movement whose concepts are based in Ignatian spirituality.
“It’s helped shape my moral compass,” the 18-year-old said. “I try to go to church every Sunday, do what I think is right and make good decisions.”
She continued, “Coming to St. Mary’s, it’s definitely helped shape me.”
Broussard played varsity basketball and was a team captain her junior and senior years, describing herself as someone who leads by example.
“It felt good to know that I’m not necessarily the loudest one on the court but people look up to me,” she said.
Broussard, who played AAU basketball in middle and high school, lights up when she talks about the sport.
She credits athletics with helping her to concentrate on her studies.
“It’s helped me stay focused,” Broussard said. “It’s helped guide me in the right direction.”
“She’s had me for five semesters and always, every single time, she got an A-plus,” said Debi Flynn, the French teacher and foreign language department chairwoman at St. Mary’s. “I’m pretty demanding so it isn’t easy. No matter what challenge you gave her she was able to run with it and she does it with everything, not just French.”
Broussard completed about 70 hours of community service, more than doubling the St. Mary’s requirement. Her service included tutoring, coaching girls’ basketball and volunteering with Saints Against a Violent Earth, a school club that works to inform students about the environment and world issues.
“This club is something you can do good with,” Broussard said. “It was important and I liked it.”
“She’s an awesome kid, always well prepared, very into class discussions and really puts all of her effort into it,” said Nancy O’Leary, math department chairwoman at St. Mary’s. “She’s one of the kids you’re going to remember. You’re going to expect her to do great things.”
Read about more stand-out grads here.
Copyright (c) June 14, 2013 CatholicReview.org
PrevNext