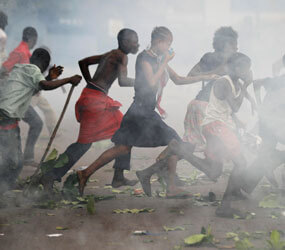 KINSHASA, Congo – Catholic officials called for calm after a tense day of polling in which violent incidents claimed the lives of nearly a dozen people during Congo’s presidential and legislative elections.

“The electoral campaign that took place in a tense atmosphere has ended with a funereal note,” the Congolese bishops’ conference said in a Nov. 29 statement that deplored deaths in a polling station in the southeastern city of Lubumbashi. Armed men in civilian clothes, reportedly members of a local Katanga separatist movement, attacked the polling station, killing two police officers and one female voter. In the same area, police also opened fire and killed seven-eight men who attacked a convoy carrying electoral materials.

The bishops said that although the elections took place in an environment of calm in many areas of the country, violent incidents marred the day in other places. Apart from the armed attack on Lubumbashi polling station, news sources also reported that several dozen polling stations in the central city of Kananga, an opposition stronghold in the province of Kasai-Oriental, were set on fire early Nov. 28, when ballot boxes were found stuffed before the start of polling.

The fact that many voters found that their names were not on electoral lists and many polling stations lacked ballot papers, ink and other materials, just added to the general confusion and tension of the day, the bishops said.

The Catholic national justice and peace commission, which had deployed 30,000 Congolese observers throughout the country, said that, by early Nov. 29, it had received reports from only 25 percent of the observers, most of whom did not have rapid means of communication. However, according to these initial reports, voter turnout was high, and people were voting with great enthusiasm, despite certain logistical and security problems.

A blog by Caritas Internationalis confirmed these observations.

A 20-year-old student identified only as Innocente told Caritas: “I am here to contribute to the development of my country. My hope is that parents can send their children to school and that students can have access to study grants, as was the case in the past.”

Mwanwa, an observer and representative of a political party participating in the elections, told Caritas Nov. 28 morning that she had not been able to find the polling station that she had been designated to observe.

“I will stay all day if necessary,” Mwanwa told Caritas. “It is my duty to participate in this election, and no one will stop me from doing it. I am not afraid.”

In its message, the justice and peace commission reminded the Congolese population: “These elections are a decisive step for the future of our country, for the consolidation of democracy, which is the way forward for our living together as brothers and sisters and for development of the Congo.”