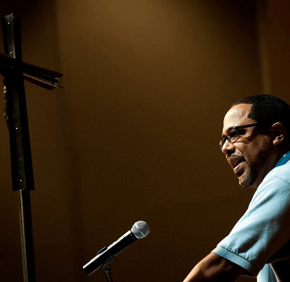 By George P. Matysek Jr.
gmatysek@CatholicReview.org
TOWSON – The world may encourage men to do whatever they please, but God tells them to do only what he demands.
That was the message delivered by Richard Lane to 700 Catholic men from throughout the Archdiocese of Baltimore who gathered at Calvert Hall College High School March 16 for the annual Catholic Men’s Fellowship Conference.
Lane, a retired educator and a prominent Catholic evangelist, was one of several speakers at the daylong event.
“Darkness tries to convince you what’s wrong is right,” said Lane, warning that secularism is “destroying the very fabric of society.”
“We need to bring the light of the truth back to this dark world,” he said.
Lane called the Bible the “playbook” that should guide men’s lives, referring to it as an acronym for “Basic Instructions Before Leaving Earth.” He also encouraged men to attend Eucharistic adoration.
In his homily at the concluding Mass, Archbishop William E. Lori noted that many of those present for the conference went to confession that day, honestly confronting the issues that threaten their spiritual lives. He encouraged everyone to receive the sacrament before Easter.
“Sin – serious sin – has a way of keeping us on the run, hiding behind excuses, making alibis and creating pretexts that ruin our relationship with God and others,” Archbishop Lori said. “Sin and sinful habits have a way of consuming us – of becoming the most important thing in our lives – more important than God and our loved ones.”
Ralph Martin, president of Renewal Ministries and associate professor of theology at Sacred Heart Major Seminary in Detroit, encouraged men to be bold in sharing Christ’s message with others.
“If we really care about people,” Martin said, “we are really going to be concerned about their salvation.”
This year’s conference was one of the largest. John Dotson, a 62-year-old parishioner of Sacred Heart, Glyndon, said he was encouraged to see so many men attending the event, including fathers and sons.
“It’s a wonderful, prayerful day,” he said. “It’s energizing.”
Wayne Pettie, a 73-year-old parishioner of St. Philip Neri, Linthicum, said he attended the conference as a way of deepening his faith.
“I’m retired and I thought I should try to get more meaning out of religion and understanding my faith better,” he said. “I should evangelize myself more.”
See also:
Church leaders grow in faith at Mid-Atlantic Congress
John Harbaugh connects faith, work and family
Copyright (c) March 18, 2013 CatholicReview.org
PrevNext