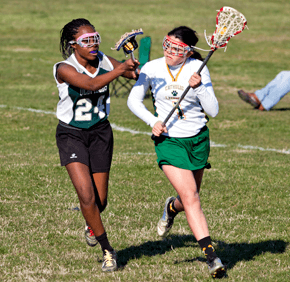 By Elizabeth Lowe
elowe@CatholicReview.org
Twitter: @ReviewLowe
At age 15, Megan Morales is wise beyond her years.
The Catholic High School of Baltimore sophomore joined the school’s indoor track team this year, making her a three-season athlete – reasoning that when she is busy in the sports arena, she doesn’t have time to procrastinate on her schoolwork.
“With sports, I’m determined and motivated to get my work done,” said Morales, who also plays varsity lacrosse and field hockey.
Morales, who has a 3.7 GPA, takes honors courses and is a newly inducted member of the National Honor Society.
As a student ambassador, she gives prospective Catholic High families tours, and helps out at school open houses, fairs and during shadow days.
“It’s definitely an honor,” said Morales, who added the experience helps her “to be a well-rounded person.”
She is also a member of the school’s environmental club.
Morales has not yet begun a serious college search, but she aspires to be a veterinarian.
“I’ve always wanted to work with animals,” said Morales, who has a dog and hamster at home in Joppa.
A parishioner of St. Michael the Archangel in Overlea and former student at its parish school, Morales volunteers there with Vacation Bible School, spaghetti dinners and open houses.
Morales cherishes her faith.
“Since I’ve attended Catholic school all my life, it’s (faith) important,” Morales said. “I need God in my life to help me through everything. I’ve realized I need faith more. It’s (life) difficult sometimes.”
In addition to being a leader in school and at church, Morales also steps up as a student athlete.
Kari McBride, Catholic High’s athletic director, described Morales as “the nicest girl, always willing to help the other girls. She is a leader on the team.”
“She’s just an amazing athlete,” said McBride, describing Morales as “super competitive.”
For the Cubs, Morales plays midfield and attack with lacrosse; midfield and forward with field hockey; and runs the 1,600 and 800 meters for track.
Bo Morris, Catholic High’s field hockey and lacrosse coach and a math teacher, said when he thinks about Morales, “competitive is the first thing that comes to mind, very determined.”
“She’s a pleasure to coach,” Morris said. “She gets the most out of her abilities.”
During the summer months, Morales stays busy by playing on a club lacrosse team and in a field hockey league, both in Harford County.
She is also helping coach a girl’s lacrosse team in Perry Hall.
“I like helping little kids learn a new sport,” Morales said. “I can give back and help them.”
Megan Morales
Sophomore
The Catholic High School of Baltimore
Credentials: Student ambassador; National Honor Society member; plays varsity lacrosse and field hockey, runs indoor track; active volunteer at home parish, St. Michael the Archangel in Overlea
Also see:
Cristo Rey senior grows in faith
St. Frances Academy junior running full steam ahead
St. Mary’s senior shares his faith
Mercy senior makes waves overseas
IND senior is committed to service
Mount St. Joseph senior is a team player
Mount Carmel senior is a faith leader
Goretti senior keeps involved
Quick turnaround for Spalding senior
Loyola junior sets example for peers
Seton Keough senior takes the cake
Calvert Hall’s Grace upholds family name
PrevNext