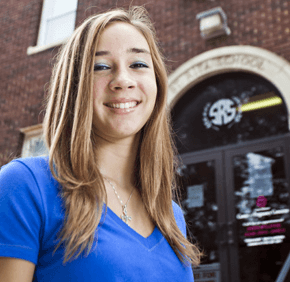 By Elizabeth Lowe
elowe@CatholicReview.org
Twitter: @ReviewLowe
PARKVILLE – Shannon Czapla has been involved with the Respect Life committee at St. Joseph in Fullerton for half of her life – which is all of 14 years.
It comes as no surprise that when Czapla, who graduated in May from St. Joseph’s parish school, wrote an essay for school earlier this year to incite action, she wrote about abortion, what society needs help with.
Czapla, an incoming freshman at The Catholic High School of Baltimore who plans to start a Respect Life group at the all-girls school, took the assignment a step further.
In March, Czapla challenged her nearly 200 middle school peers to pray and fill baby bottles with money for the Center for Pregnancy Concerns’ baby bottle campaign.
Czapla recalls telling her peers that if they couldn’t give money, they could pray. “That works just as well,” she said.
The students raised nearly $1,400 – almost three times Czapla’s goal – which she donated to the Essex center in April.
“If the authority figures in my life had no idea what that was (the Center for Pregnancy Concerns), how could anyone else?” said Czapla, who called abortion “a growing problem in our society.”
At Catholic High, Czapla hopes to rally students to participate in the annual national March for Life event in Washington, D.C. The 2013 march is next Jan. 25.
Alice Steck, the coordinator of the Center for Pregnancy Concerns St. Rita’s Center, which operates out of St. Rita in Dundalk and serves more than 1,000 women annually, said she “was a little taken back by her (Czapla’s) drive and her passion.”
“She is just so on fire for this ministry,” Steck said of Czapla. “She’s just impressive, to be so young and to have that level of maturity spiritually. I look forward to seeing how the Lord’s going to use her. The Lord and one person can do great things.”
Steck said the campaign donation helped with the center’s operating costs, which supplies women with pregnancy tests, diapers, formula, baby wipes, clothing, strollers and high chairs, among other items.
“The need is great,” she said.
Czapla volunteers at the center as she is able, usually sorting and folding baby clothes.
Mary Anne Czapla, Shannon’s mother, who heads St. Joseph’s respect life committee, said “it was God, it was the Holy Spirit” working through Shannon for the campaign.
She attributes their involvement with the parish committee as fuel for her daughter’s passion for life.
“I’m very proud that she had the courage to lead this project,” Mary Anne Czapla said. “I’m glad she had the passion to lead this project for people in need. I’m glad she wants to bring awareness about it.”
For information on the Center for Pregnancy Concerns, visit www.cpcforhelp.org.
Copyright (c) Aug. 15, 2012 CatholicReview.org
PrevNext