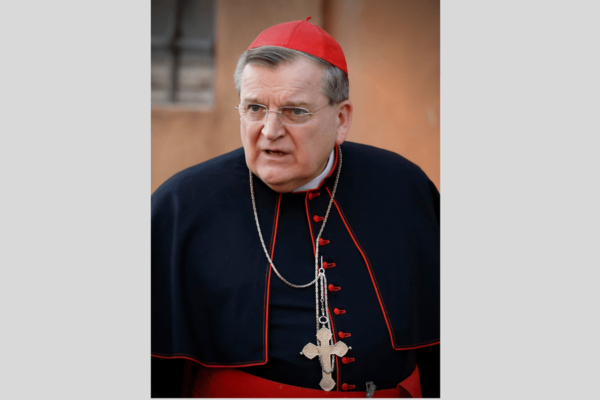 U.S. Cardinal Raymond L. Burke, a canon lawyer and former head of the Vatican's supreme court, is pictured in a 2014 photo. While the pope has the fullness of authority and power in the Catholic Church, he can exercise that authority only in obedience to Christ, and if he does not, it is up to the Catholic faithful to object, said Cardinal Burke. (CNS photo/Paul Haring)

ROME  — While the pope has the fullness of authority and power in the Catholic Church, he can exercise that authority only in obedience to Christ, and if he does not, it is up to the Catholic faithful to object, said U.S. Cardinal Raymond L. Burke.

The pope’s power “was given by Christ himself and not by any human authority or popular constitution and, therefore, can be exercised only in obedience to Christ,” said the cardinal, a canon lawyer and former head of the Vatican’s supreme court.

The cardinal spoke April 7 to several hundred Catholics concerned about what they see as growing confusion in the Catholic Church, particularly because of the way Pope Francis opened the possibility for some divorced and civilly remarried Catholics to receive Communion.

At the end of the afternoon meeting in Rome, organizers released a statement saying, “Amidst the grave danger to the faith and unity of the church that has arisen, we baptized and confirmed members of the people of God are called to reaffirm our Catholic faith.”

The statement went on to affirm their belief that under no circumstance can divorced and civilly remarried Catholics receive the Eucharist unless they first obtain an annulment of their sacramental marriage or promise to abstain from sexual relations with their new partner.

Cardinal Burke and German Cardinal Walter Brandmuller, a church historian, headlined the conference. Along with two cardinals now deceased, in 2016 they released a set of “dubia” or questions on which they asked Pope Francis for clarification.

In their “dubia,” the cardinals said opening a process that eventually would allow such couples to receive the sacraments would seem to indicate: “people who are not married can, under certain circumstances, legitimately engage in acts of sexual intimacy”; “the divorced and remarried are legitimate spouses and their sexual acts are lawful marital acts”; or that “the faithful can approach the eucharistic table even with consciousness of grave sin, and receiving absolution in the sacrament of penance does not always require the purpose of amending one’s life.”

Other bishops and bishops’ conferences who have issued pastoral guidelines for implementing “Amoris Laetitia,” the pope’s document on ministry to families, insist that while there is no easy and automatic path to the sacraments for divorced and civilly remarried couples, pastors must reach out to them, help the couple recognize their situation, understand church teaching on the permanence of marriage and take steps toward living a more Christian life.

The process, some bishops have said, could eventually lead to the sacraments.

For example, the bishops of the region of Buenos Aires, Argentina, issued guidelines that Pope Francis ordered to be included in the “Acta Apostolicae Sedis,” the official record of Vatican documents and acts. “When feasible,” the region’s bishops said, divorced and civilly remarried couples should be encouraged to abstain from sexual relations, which would allow them to receive the sacrament of reconciliation and the Eucharist.

While there is no such thing as “unrestricted access to the sacraments,” the bishops said, in some situations, after a thorough process of discernment and examination of the culpability of the individual in the failure of the sacramental marriage, the pope’s exhortation “opens the possibility” of reception of the sacraments.

Cardinal Burke told those meeting in Rome that “it always has been clear that the Roman pontiff could dispense from the law or interpret the law, but only with the aim of serving its end and never to subvert it.”

In exercising his authority as pope, the cardinal said, “any expression of doctrine or practice that is not in conformity with divine revelation, contained in the sacred Scriptures and tradition of the church, cannot be an authentic exercise of the apostolic and Petrine ministry and must be rejected by the faithful.”