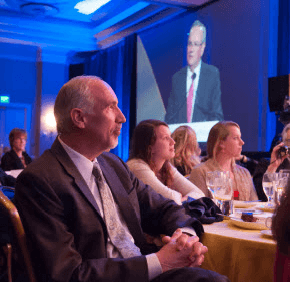 By Maria Wiering
mwiering@CatholicReview.org
Twitter: @ReviewWiering
Years ago, Mark Greenberg described Catholic Charities of Baltimore as a place where “we cherish the divine within you.” The words evolved into the social service agency’s motto, “Cherishing the Divine Within.”
On April 22, Catholic Charities honored Greenberg for exemplifying that vision with a Distinguished Service Award, the organization’s highest honor.
Greenberg was among the staff members, volunteers and donors recognized at Catholic Charities’ annual awards banquet, held at the Baltimore Marriott Waterfront with approximately 620 guests.
The evening was an opportunity for Catholic Charities “to stop and celebrate what we, as a group, are able to accomplish on behalf of our brothers and sisters who need us,” said William J. McCarthy Jr., the organization’s executive director.
After more than 38 years with Catholic Charities, Greenberg recently retired from his position as division director of child and family services. He called his years with the agency “a storybook career” because he spent his “entire adult life” in work he felt passionate about, with good people and for a good organization.
“It’s been an honor and blessing for me to be part of this agency,” he said.
Also recognized with a Distinguished Service Award was Monsignor Arthur F. Valenzano, rector of the Basilica of the National Shrine of Assumption of the Blessed Virgin Mary in Baltimore and a member of Catholic Charities’ board of trustees.
Monsignor Valenzano has a long history of promoting and assisting Catholic Charities programs, including My Sister’s Place Women’s Center, a day program for homeless women located next to the Basilica. He called Catholic Charities “the face of the church for the people most in need in Baltimore.”
The human services arm of the Archdiocese of Baltimore, Catholic Charities is Maryland’s largest provider of human services and the third-largest Catholic Charities organization in the United States.
In fiscal year 2012, its programs served more than 370,000 meals; provided mental health assessment, consultation and treatment for more than 16,600 people; and placed nearly 1,000 people in transitional and permanent housing, according to the organization.
The event also honored the Maryvale Friend to Friend program, which pairs students from Maryvale Preparatory School in Brooklandville for activities with residents of Gallagher Services, a Catholic Charities program for people with intellectual disabilities. The program received the organization’s Anne Lindsay Otenasek Youth Service Award, named for a 21-year-old Baltimorean killed in the 1988 bombing of Pan Am Flight 103 over Lockerbie, Scotland.
Catholic Charities awarded 10 Mission in Action Awards. Recipients were Frances Callis, a Hunger-Free Communities outreach worker in Western Maryland; David Carberry, St. Vincent’s Villa volunteer; Joanna Frazier, Gallagher Services volunteer; Jim Hillmann, Catholic Charities resource development manager in the Lifetime Services Division; Eileen Kavlich, Villa Maria School nurse; Cindy Lueckert, administrative assistant in Catholic Charities’ development and communications department; Tanya Ritter, director of Catholic Charities community housing programs; Aileen McShea Tinney, a staff member of the agency’s Division of Housing Services; Liz Turnbaugh, Our Daily Bread volunteer and donor; and Back on My Feet Baltimore, a nonprofit that benefits the men of Christopher Place.
The evening included video vignettes of the Maryvale Friend to Friend program, Catholic Charities’ Head Start programs, My Sister’s Place and Esperanza Center, which is celebrating its 50th anniversary of helping Latino immigrants.
McCarthy shared the organization’s plans for expansion, including a partnership with Baltimore City and local nonprofits including Health Care for the Homeless and the Weinberg Foundation to assume operation of the Weinberg Housing and Resource Center along the Fallsway.
The center is located across from Our Daily Bread Employment Center, a Catholic Charities program offering meals and employment resources for people in need. The partnership will be finalized July 1.
“The significant growth of our operations … demonstrates our commitment to help reduce poverty in Baltimore,” McCarthy said.
This year’s event theme was “Lord, when did we see you?” It was taken from Matthew 25, where Jesus describes the righteous person feeding the hungry, slaking the thirsty and welcoming the stranger, stating, “Whatever you did for the least of these brothers and sisters of mine, you did for me.”
“This Gospel passage is the clearest and most accurate description of what we do at Catholic Charities,” McCarthy said.
Archbishop William E. Lori, chairman of Catholic Charities’ board of trustees, expressed gratitude for the work of the awardees and the agency.
“We cannot be the church unless we’re a church of charity,” he said. “We manifest that by serving those most in need.”
Referring to the evening’s theme, Archbishop Lori told attendees, “thank you for having a heart that sees.”
Also see:
Tragedy in Holy Trinity parishioner’s life led to volunteerism
Families open hearts, homes to Filipino children seeking adoption
BCL uses Presidents Day for service, recognition
Copyright (c) April 23, 2013 CatholicReview.org
PrevNext