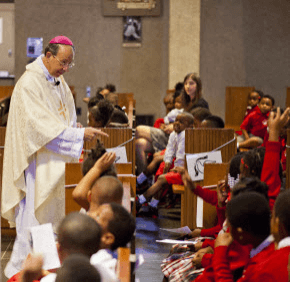 By Elizabeth Lowe
elowe@CatholicReview.org
Twitter: @ReviewLowe
Peace and justice were the themes of an anniversary Mass and outdoor festivities Sept. 23 to honor Cardinal Shehan School’s 25th anniversary.
Archbishop William E. Lori celebrated Mass at St. Matthew in Northwood, which is adjacent to the school. Father Joseph L. Muth Jr., pastor of St. Matthew, concelebrated the liturgy.
To view a slideshow of the event, navigate the arrows below.
During his homily, Archbishop Lori talked to students about Cardinal Lawrence Shehan, the 12th archbishop of Baltimore, for whom their school is named.
“He was a great friend of everyone,” Archbishop Lori said. “He was a great peacemaker in our community back in his day. We’ve gathered to celebrate a Mass to pray for peace and I know that all of you want a very peaceful, beautiful world.”
The archbishop challenged students to name places in the world that need prayers for peace. Responses included Syria, Kenya, Afghanistan, Haiti, Colorado and Baltimore City.
“What can you do, what can I do to work for peace?” Archbishop Lori asked. “We can treat each other nicely. In other words, it starts with us.”
After the liturgy, students headed outside and were greeted by Archbishop Curley High School’s 13-person drum line performing in front of the school.
Listen to the sounds of a performance by the choir. .
Continuing with the theme of peace, students recited a peace prayer and pledge in English and Spanish. They cheered and blew bubbles as white balloons shaped like doves were released and sailed toward the brilliant blue sky.
Eighth-grader Gabrielle Huff, a student at Cardinal Shehan since pre-K, is thrilled to have participated in the anniversary events.
“Cardinal Shehan School is one of the best schools because we’re peaceful here,” Gabrielle said. “We have a great principal, staff, faculty, administrators. The teachers, they get you prepared for the outside world.”
During his visit, Archbishop Lori blessed the school’s new windows and sprinkled holy water on some of them.
The 247 new windows, which cost $400,000 and were funded by the Archdiocese of Baltimore, were installed this summer, said Oblate Sister of Providence Rita Michelle Proctor, Cardinal Shehan’s principal. She estimated the previous windows were about 30 years old.
“They were loose and coming apart,” Sister Rita Michelle said. “I never thought we would get new windows. It should make a difference in the heating bill.”
Sister Rita Michelle expects there will be additional events during the 2013-14 school year to mark the anniversary. Cardinal Shehan School was formed in 1988 when the former parish schools of St. Matthew and St. Thomas More in Baltimore merged.
“It is my prayer,” Sister Rita Michelle said, “God will continue to move us forward for the next 25 years.”
Also see:
Parish milestones: St. Luke celebrates 125 years
PrevNext