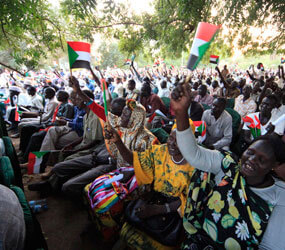 CAPE TOWN, South Africa – The head of a delegation of African church leaders visiting Sudan has urged the Sudanese government to respect the choice of the majority of the people of Southern Sudan in the Jan. 9 referendum that may split Africa’s largest country.

Cardinal Polycarp Pengo of Dar-es-Salaam, Tanzania, president of the Symposium of Episcopal Conferences of Africa and Madagascar, SECAM, warned that “anybody trying to go against the will of the majority of the voting of the people can be sure that he is standing against the will and plan of God.”

In a homily at a Mass Nov. 7 in Rumbek, Sudan, Cardinal Pengo said the outcome of the vote depends on the Sudanese people “viewing the referendum program as willed by God and adopting the spirit of love and service for the common good,” according to a report by Father Don Bosco Ochieng, director of the Rumbek Diocese’s Radio Good News.

Cardinal Pengo was in Sudan leading a SECAM delegation and joined members of the Association of Member Episcopal Conferences in Eastern Africa, AMECEA, in a weeklong visit that coincided with a meeting of the Sudan Catholic Bishops’ Conference in Rumbek. He urged the people of Southern Sudan to “seek God’s intervention when they make choices” in the referendum, the report said.

The visit was set to conclude Nov. 12.

The referendum was called for in the Comprehensive Peace Agreement of 2005 that ended Sudan’s decades-long civil war. The referendum will determine if the largely Christian and animist South, with its significant oil deposits, will secede from the predominantly Islamic North. Observers consider the referendum a step that could significantly shape the region’s future.

Opening the bishops’ meeting Nov. 8, Bishop Rudolf Deng Majak of Wau, president of the Sudan bishops’ conference, said church leaders are looking for “ways of sending a collective message to the community preparing for the referendum.”

Marko Col Maciec, a government official from the Lakes state of Southern Sudan, told the bishops that local authorities expected advice from the bishops in preparing for the referendum so that the election might be free and secure, Radio Good News reported.

In a Nov. 5 press statement release, the two regional bishops’ conferences said the visiting bishops planned to discuss major challenges facing the Sudanese church and identify ways to help Sudan’s bishops to address them. Their concerns were aimed at promoting justice, peace and reconciliation among the people of Sudan in an attempt to reduce conflict and avert violence that may result following the referendum.