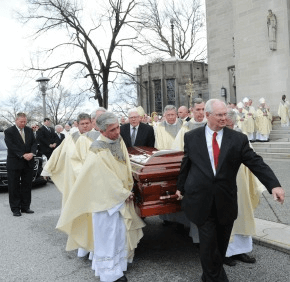 Men, women and a few children came to mourn the 14th archbishop of Baltimore March 28, when the celebration of his life served as an opportunity for old friends and former colleagues to embrace, reminisce about the cardinal and catch up on their own lives.

Nowhere was that camaraderie more evident than among the priests of the Archdiocese of Baltimore, from the 58 who were ordained by Cardinal Keeler from 1989 to 2007, to the eight mostly more seasoned men who served as his pallbearers.

Monsignor Robert Jaskot, ordained in 1989, was the only priest who fell into both categories. Like his fellow pallbearers, the pastor of three parishes in Frederick County served Cardinal Keeler in the chancery, as his priest secretary.

Several pallbearers talked about the genuine care and concern Cardinal Keeler showed for the priests of the archdiocese.

Monsignor Jay O’Connor, pastor of Our Lady of the Fields in Millersville, was Cardinal Keeler’s first vocations director in the Baltimore Archdiocese.

“At his first meeting with me,” Monsignor O’Connor said, “he told me, ‘my second-highest priority is the development of vocations.’ His first was the care of priests.”

Monsignor J. Bruce Jarboe, pastor of St. Ann in Hagerstown, served in the Office of Clergy Personnel under Cardinal Keeler.

“In a very unassuming way, and in the midst of carrying many responsibilities,” Monsignor Jarboe said, “he regularly made a special effort, like a parish priest visiting parishioners, to check in and visit with priests who were sick or in the hospital, recuperating from illness, or grieving the loss of a family member.”

“I remember,” Monsignor Jarboe added, “how he really enjoyed being with our retired priests, how he expressed to them his heartfelt appreciation and respect for their years of dedicated service.”

“He wanted, always, to be available to those who worked with him, and especially to his priests,” he said. “If a priest called, he made every effort to see the priest that day if possible – that’s how committed he was to us as a bishop, a father and a shepherd.”

That extended to the start of a man’s ministry, as, at Cardinal Keeler’s urging, seminarians wrote to him at Christmas and Easter, providing updates on their families and studies.

“It was Cardinal Keeler,” Father Francik added, “who began having seminarians serve at archdiocesan liturgies, drive him to various appointments so he could (talk) with them in the car. … He would ask me specific questions about the men’s study, to make sure they were being properly formed.”

Father Patrick Carrion, pastor of the Catholic Community of South Baltimore, appreciated Cardinal Keeler’s openness to suggestions when he served in clergy personnel.

“There were times,” Father Carrion said, “when recommending a priest assignment, we would be on totally different pages. He allowed the challenge of a push back, to hear and see the other perspective. Typically, he would accept the recommendation and even express gratitude that we pushed him.”

Father Carrion was among those who enjoyed last-minute invitations to dinner at the archbishop’s residence. Even if the fare was a microwaved meal, it usually included a glass of wine and conversation about a shared passion – travel.

“Then,” Father Carrion said, “we would both do the dishes.”

The other pallbearers were Father William P. Foley, coordinator of pastoral care for retired priests; Father John “Jack” Ward, pastor of Prince of Peace in Edgewood and St. Francis de Sales in Abingdon; and Father Michael J. White, pastor of Church of the Nativity in Timonium.

Both Father Ward and Father White served Cardinal Keeler as his priest-secretary.

Part of his motivation in caring for priests was so that they would be better able to care for their people.

“My first appointment as a pastor was at St. Andrew by the Bay,” Monsignor O’Connor said. “We met, and he wanted to give me advice. He told me, ‘be sure you take care of the ill and elderly.’ That was important.”

As in his life, all welcomed at Cardinal Keeler’s funeral Mass