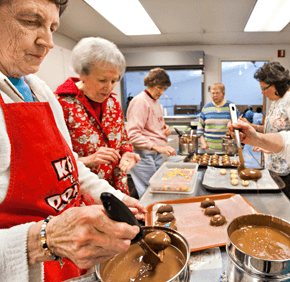 By Maria Wiering
mwiering@CatholicReview.org
Twitter: @reviewwiering
HAGERSTOWN – At St. Joseph Parish, it’s hard to give up sweets for Lent.
For weeks, parishioners fill orders for chocolate-covered candy eggs, filled with peanut butter or coconut, that are distributed weeks before Easter.
Not all make it through the triduum.
Candy-maker Maryann Miller, 66, eats most of her order before Easter, she said, first nibbling around the fan of chocolate at the egg’s base before biting into the soft center. She does save a couple for her grandchildren’s Easter baskets.
“We’ve already filled my order and they’re half gone,” she said with a laugh.
A group of about 18 parishioners make and sell the Easter egg candy, a tradition that began in the late 1990s. The same group also makes a widely revered hard candy at Christmastime. Proceeds benefit the parish’s general fund.
They meet in the parish hall twice a week from 9 a.m. to 1 p.m., with a break for a potluck lunch. Work follows a predictable rhythm – they mix bowls of cream filling, form it into egg shapes and place the eggs on wax paper. The eggs cool in a freezer for 10 minutes before being dipped in melted chocolate – dark chocolate for coconut eggs and milk chocolate for peanut butter. The chocolate hardens, holes are patched, and the eggs are bagged and stored.
The process is filled with conversation, music and laughter.
“We like to combine fundraising with fun raising,” quipped their pastor Father Christopher P. Moore, who often drops by to visit.
The group makes an average of 320 eggs per day, said organizer Mary Hellane. The recipe belonged to a parishioner. It’s a secret now, but the candy-makers have it memorized.
Parishioners donate ingredients, so the dollar price for each piece goes directly to the parish. Last year they made 2,800 eggs, but have produced as many as 3,650 in a year. A dozen always goes to the archbishop – something Archbishop William E. Lori can anticipate as he celebrates his first Easter in Baltimore.
Harry Stains, 82, is one of only two men in the regular candy-making group. He orders eight dozen, keeps half and gives the other four dozen to friends and family. His late wife, Mary, started the egg-making, he said.
His favorite part?
“Sampling,” he said.
Other Hagerstown churches sell similar candies, but St. Joseph parishioners are convinced they’ve got the competition beat – both with egg size (roughly the size of a real chicken’s egg) and presentation. Their signature is the hand-made pastel frosting flower that adorns each piece, pressed into the chocolate shell before it hardens.
As Teresa Schafer, 78, placed each egg into a plastic bag, she said, “A lot of people cut them in half and eat them.”
“I’d never do that,” was the quick reply of her bagging partner, Jeanette Rutherford, 77.
The candy-making group has become like family, said Hellane, 64, a lifelong parishioner. They are glad to bring money to the parish, but prize their fellowship most, she said.
“We have a lot of fun doing this together,” she said.
Copyright (c) March 3, 2013 CatholicReview.org
PrevNext