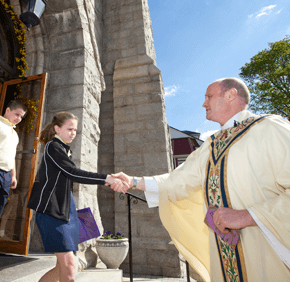 Father John Williamson, pastor of Church of the Ascension, Halethorpe, and St. Augustine, Elkridge, delivers the homily to students at St. Augustine during a Mass of Thanksgiving May 2 now that his cancer has gone into remission. (Tom McCarthy Jr. | CR Staff)