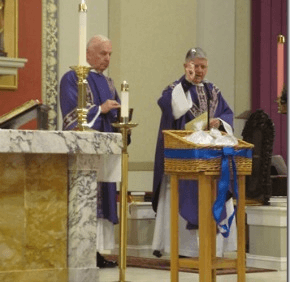 Maybe it’s the fact that he’s their patron saint. Maybe they admire his steely reserve, or desire to live under his immortal protection. Maybe it’s just the image of a winged warrior with a spear held to Satan’s head.

Whatever the reason, police officers, Catholic or not, have a special affinity for St. Michael the Archangel, according to Anita Schatz, a parishioner of St. Stephen in Bradshaw.

“They believe in God and they believe in angels,” she said, adding that, now, more than ever, police officers appreciate all the support they can get, practical or spiritual.

More than happy to oblige, she is in the midst of an effort to give a St. Michael medal to every police officer in Maryland. So far, she has covered the state police, Baltimore City, Baltimore County and Harford County.

The silver-plated medals cost her about 18 cents each; Schatz said they are high-quality and supplied by a family business.

She has single-handedly raised enough money for about 8,500 medals during the past three months, but “my funds are running dry,” she said.

A single parish, Schatz said, could join the effort and provide medals to an entire precinct for a reasonable donation. She estimated that less than $1,000 would cover the rest of Maryland, but she doesn’t necessarily want to stop there.

“If this takes off, I’d like to go national,” she said.

Schatz is deeply concerned about police officers amid what some have described as a rise in anti-police sentiment.

“The police are being attacked,” she said, adding that her drive to get them St. Michael medals “needed to happen yesterday.”

Father Edward Meeks, pastor of Christ the King in Towson, is assisting Schatz in her efforts and blessing the medals before they are given to the officers.

“I think police are coming under fire right now, probably because of the bad actions of a very few of them,” Father Meeks said. “They need our encouragement. This is a nice outreach to them, and I think it’s something they really appreciate.”

Schatz noted that the medals themselves don’t have special powers.

“It’s a reminder to the officers that they’re being protected by St. Michael, their patron saint,” she said. “It’s the saint who works the miracles, not the medal.”

Donations for the effort are being accepted at Christ the King, located at 1102 Hart Rd. in Towson. Checks may be made out to Christ the King Church, with “St. Michael medals” noted. For more information, contact the church at 410-321-0711.

Message of Our Lady of Guadalupe spreads in Westminster, 484 years later